Heading back west again and because Croajingolong had been such a pleasant surprise we took the 40km dirt road south from Cann River to Thurra Camp. The campspot was great, with a lot more spots, but again a pristine beach with few people, seals and whales, and Point Hicks lighthouse nearby, the first part of mainland spotted by Captain Cook in 1770, and named after the man who spotted it first.

On Xavier’s birthday we walked up to the sand dunes, set back from the beach, where he found jaw bones of an animal we haven’t identified yet. We think bush rat or antechinus. Xavier also found many footprints in the sand and we found a pair of lyre birds in the forest too! After 10km of walking on his birthday he slept for 3 hours in the car! 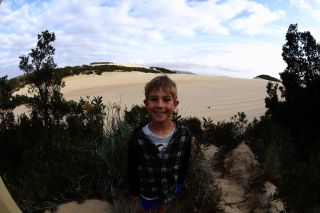 Jaw Bones in the dunes