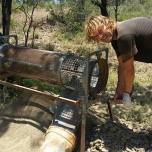 Step 3 – Pouring the gravel extract into a sieve 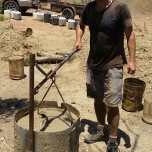 Step 6 – Marvel at the sapphires you have found

A spur of the moment decision found us travelling inland again towards the exotically named towns of Emerald, Sapphire and Rubytown. Fossicking fever had grabbed us again and against our better judgement with temperatures forecast to reach high 30’s over the next few days we decided to seek fame and fortune in the gem fields.

Arriving late we made a call and booked an early morning trip out with a guide to fossick. We had seen the bags of sand wash sold for varying amounts up to $20 but knowing that these are “seeded” with a few fragments and sometimes a cut sapphire but we wanted to experience it first hand.

That night storm clouds gathered and a fierce lightning and thunderstorm was unleashed upon the town. Judging by the dusty roads and lack of foliage it must have been a welcome downfall. Our Kiwi guide greeted us early the next morning at a crossroads and we drove off. Somewhat unimpressed that we had picked his usual day off he showed us what to do and retired to the comfort of his air conditioned 4WD. At 8am it was 30 degrees. By 9am it was 33 degrees and climbing rapidly.

The extraction process is quite straight forward. Take a pickaxe and/or mattock, select a piece of land, preferably where an old river bed has been and start digging. Shovel into buckets, walk them to a rotating mesh drum, pour in, turn the handle and the heavier dirt is filtered off into another bucket. This bucket is then walked to the Willoughby wash where it is poured onto two sieves, the bigger mesh on top. Each sieve in turn is placed in the Willoughby wash, basically a big bucket of muddy water, with a handle that is cranked up and down. The correct cranking speed is important to prevent losing all your wash into the bottom of the bucket. If done well, all the heavier stones, hopefully including the sapphires, accumulate in the centre of the sieve. The final steps are to turn the washed gravel over on a hessian bag and starting from the centre, working out, look for the glassy sapphires.

This was repeated again and again and when the temperature rose to 35 degrees our guide called for a tea break from the air-conditioned cabin of his vehicle. We couldn’t refuse. The kids enthusiasm had faded quickly and to his credit our guide had noticed this and discretely scattered sapphire fragments on a discard pile. When pointed out to them it took them another 30 minutes to pick them all out.

We continued until my hands were so blistered I couldn’t wield the pick any longer and we called it a day around noon with a very paltry collection of sapphires of blue, yellow and green.

Back at the caravan park the kids found someone had left a sieve lying around and they grabbed it so they could start sieving the gravel in wheelbarrows there. A few more sapphires were found but it hasn’t changed our plans for retirement!

Very dusty, thirsty, and tired we headed for the local swimming pool that opens at 3pm and had a very cheap and enjoyable cool down with a few grey nomads who were telling us about their mining claims. No fortunes found there either, though it seemed to be more of a social endeavour. We had been told that anyone with a claim was allowed to graze camels and cows on the common land but given the lack of fodder they had recently been rounded up and removed somewhere else. All we witnessed in the morning was a small flock of about a dozen guinea fowl foraging along the roadside and into the campground.

It was a brief but interesting experience fossicking for sapphires but clearly a tough life for those who choose that path. It seems that the smart money is made from giving the tourists the experience rather than finding the sapphires though a few we met reckoned they did alright from the fossicking on claims.

A final visit to Pats Gems was required to get expert opinion on our finds and luckily for us they confirmed we had indeed found some genuine ones.

With our wheels firmly back on the bitumen again it seemed fitting to indulge in a little luxury and as we headed down the coast towards Dolphin Heads, near Mackay, watching the sugar cane harvesting in progress.

The road down the coast is regularly transected with small gauge railway lines that are used by sugar cane farmers to transport cane or mulch to and from the processing factories. We witnessed plenty of activity with harvesting in the fields, loading and movement of the trains and the processing factory chimneys puffing away, indicative of the industry inside.

In Mackay we stayed at the beautiful Dolphin Heads resort for a few days lounging by the pool, relaxing.

View from beach of Dolphin Heads

We drove to Eungella National Park looking for platypus in the pouring rain. We found plenty of birds including the particularly colourful scarlet honeyeater there but only one platypus in Broke River.

We explored Blacks Beach, Eimeo and the city of Mackay but it was a time for winding down and relaxing.