The Tasmanian Devil hunt heats up

After a quick trip up to Cape Grim, where we saw lots of diary and wind farms, we headed over to the west coast in search of Tasmanian Devils. Xavier’s class has challenged him to see 10 Tassie Devils. In the last 15-20 years this poor animals population has plummeted by over 80% due to the facial cancer that is spread by contact between individuals so this is a particularly hard one.

Not ones to give up easily we headed towards the northern end of the Tarkine at Arthur River, the last bastion of the population where the disease hasn’t spread to yet (though it is feared it is only a couple of years away). The Parks and Wildlife rangers in the Arthur-Pieman Conservation Area visitor information centre there were fantastic, with such a detailed knowledge of the area and extraordinary capability and patience with the kids. We got information from where to find burrowing crayfish to how to make craft from kelp as aboriginal women used to do. 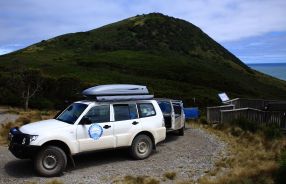 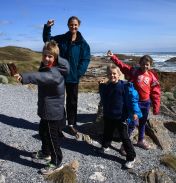 Edge of the World

Cape Grim – What are you looking at? 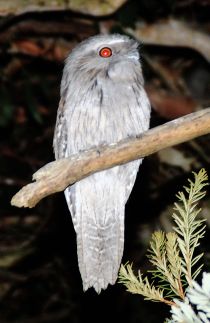 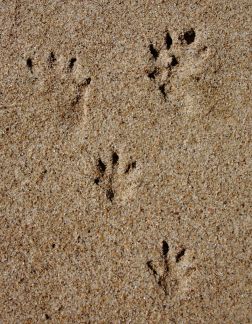 We moved into the camp area recommended to have Tassie Devil sightings. Good news – very few other campers so Amanda promised she would cook up a very meaty dinner, hoping the smell would lure them in.

Before that we visited the edge of the world to throw a stone into the water. There is no land to the west between here and South America. Walking along the beach, where massive tree trunks lie scattered amongst the rocks, Xavier found some footprints in the sand – could they be a Tassie Devils? Make your own mind up but we thought they looked like they could be.

As dusk approached, dark shapes appeared on the edges of the campground but these were just the browsing Pademelons moving in on the grass. As daylight failed we pulled out torches and waited, then when we could wait any longer we actively scoured the entire campsite spotting only numerous Pademelon and Tawny Frogmouths. Disheartened we went to bed knowing we still had another day!

Our first stop at Boat Harbour was a relatively short drive west from the port of Devonport. Our camp couldn’t have been closer to the sea! We are all loving the NW coast of Tasmania, the kids are keen fossickers, scouring every shoreline for treasures. 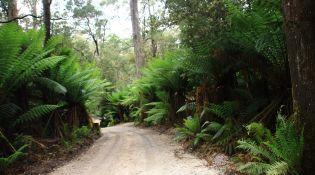 The kids at Big Tree 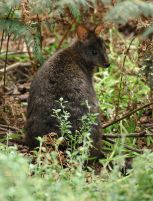 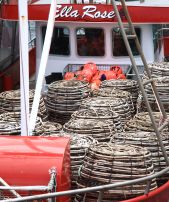 Stanley and the Nut 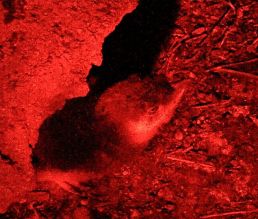 Our second day there saw Fifty Toes take on the challenge of the Stanley Nut, a large volcanic lava plug that dominates the port of Stanley. A very steep walk, rather than chairlift saw us at the top in 10 mins. Different lookouts grant you a mutton bird’s view of the town below, where filming was just about to commence for a movie called “The Light Between Oceans” based on the book. We found our first Pademelons (tiny wallabies) in a little forest up there, dozens of them squatting below the bracken. We explored the harbour, then headed inland to explore some of the roads less travelled on the edge of the Tarkine forest. These ancient forests are full of giant trees, tree ferns lining the roads, and the humidity allows a fecundity of mosses and ferns to cover dead and living trees. The kids loved the first river crossing!

On the way back we did another detour to see Little Dip Falls and the Big Tree (it was big and impressive).

The evening treat was another drive east to Burnie, on a tip-off from or neighbours, to see the penguins coming in to feed their chicks. What a great end to the day to see the little blue penguins hopping out of the ocean and up to the chicks who were sitting in their nests only metres from us, and in some cases below the boardwalk we were standing on.