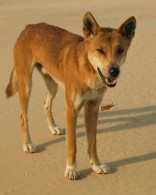 After over a week’s unscheduled stay in Noosa it was time to revisit our last major 4WD challenge of our trip, Fraser Island.

Having visited twice previously the plan this time was to explore beyond the typical tourist attractions. Previous trips had been restricted to 3 days and had seen us staying on the south east side of the island exploring only half of one side of the island.

The ferry terminal at Inskip Point is a beach of soft sand 100m from the unsealed road. As we drove onto the beach the ferry had just departed, but as I accelerated across the beach the skipper must have seen us, reversed and returned to pick us up. The ferry was empty so we got our own personal ferry service which made it seem worthwhile considering the rather pricey cost for a 5 minute crossing. The deckhand joked that he would save us a place on our return trip in a week’s time.

We had timed the tides well and drove from Hook Point along the beach and up the eastern beach, some 65km to Yurru campsite, just north of Cathedral Beach camp. The beach is under normal road regulations with a speed limit of 80km but following recent rain the unwary can be caught out at this speed with washouts.

Despite being the largest sand island in the world, over 100km long and 20km wide, there is no shortage of static and flowing freshwater and the erosion of beach sand caused by creeks can cripple the suspension of even the most sturdy cars if hit too fast.

Driving up the beach we were treated to the sight of two inquisitive dingos, then as we approached the Eurong settlement six dingos including young pups were running around the vehicles of some fishermen. Nothing beats the traditional dingo welcome to Fraser island. A ban on dogs on the island has retained the pure-bred status for these dingos as inter-breeding often occurs back on the mainland.

Shortly before Yurru camp the majestic wreck of the Maheno emerged through the sea spray in the distance.

View of the interior

The Maheno sank in 1935, washed ashore in a cyclone, but sufficient remains make it an interesting stopping point for tourists. Original wooden decking still lines some of the wreck, even after exposure to daily tides and the occasional cyclone storms over the last eighty years.

On our first day a transmission warning light came on and when actions recommended by the car manual failed to rectify it we were in a bit of a quandary. It still drove so we chose to ignore it until we got off the island again!

With a very changeable and wet long range weather forecast we chose to explore as much as we could in the first two reasonable days.

The northern forests scenic drive took us initially to a lookout over Knifeblade sandblow where the tops of overrun treetops poked starkly out of the sand. Lake Allom, further inland offered a warm refreshing swim amongst the freshwater turtles. We then took a couple of tracks to explore the western coast, Awinya and Woralie creeks. With a prevailing easterly wind, it was nice to experience calm beaches with no surf on the western side of the island. The camp at Woralie was very attractive though the creek crossing was very deep and not one that we were prepared to attempt. We were half way across when I decided it needed to be waded and when the water reached my chest I was glad I hadn’t proceeded. 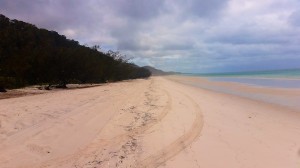 It was fun to watch a car coming the other way, without a snorkel, as the bow wave poured over the bonnet and up their windscreen.

We explored another track that headed towards Moon Point but not being the scheduled track resulted in many scratches and a nasty ding in the side of the car. To add insult to injury the last 7km to Moon Point were closed.

The track leads through magnificent forest, where mature trees dwarf the cars as they pass through. Giant Kauri trees give way to lower scrub and the outlook continually changes. The narrow roads are restricted to 30km and constantly keep the driver busy negotiating the way through natural obstacles and fallen trees can easily halt progress.