We had organised a catch up with my cousin and his partner at 1770, one of his favourite fishing and camping spots. As a special bonus my aunt was driving up with them too. Leaving the gem fields on the Capricorn Highway we very quickly arrived at the town of Comet, famous for the Leichhardt Dig Tree. In 1844 the explorer Ludwig Leichhardt marked a tree to indicate where his team had buried food and journals. Today a replica of the tree marks the point and made for a timely break.

We also passed a collection of holding rusting car frames by the side of the road.

Along the Capricorn Highway there is a novel technique to reduce driver fatigue.

Highway Trivia questions are posed on signs to ponder with answers displayed several kilometres down the road.

Whilst a great idea, the execution is poor as the questions don’t change, being fixed signs, and are destined to work only once.

The village of 1770 was built where James Cook landed for the second time on the HM Bark Endeavour in May (the first being Cooktown), although it was only renamed from Round Hill in 1970 to commemorate the bicentennial of the event. Situated on a peninsula facing the Eurimbula National Park and Bustard Bay, to the west, it was nice to be protected from the prevailing easterly winds we had been exposed to at coastal locations.

For us it was family time, catching up with my aunt, cousin and his better half. Hannah was keen to learn how to knit and my aunt patiently taught, then fixed dropped stitches time and time again as a woollen scarf grew by the day until complete. Xavier did what he loved, fossicking for treasures along the beach and Oscar and I joined my cousin fishing.

My aunt Myra had devoted so much effort preparing food for the weekend that she forgot to bring her bag packed with her clothes so the girls went off shopping. Unfortunately there are not many shops but suitable beach attire was found, and duly christened, with much mirth, as the “Sausage Dress” due to it being located on a rack next to the meat in the general store. 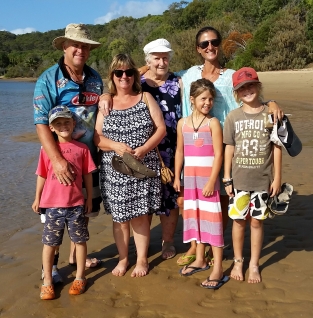 Ready to board the LARC 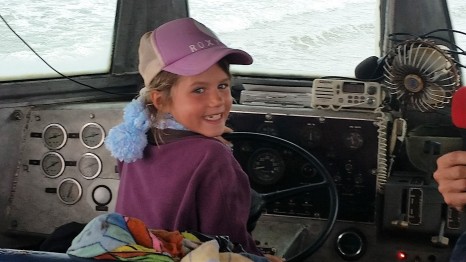 Hannah driving the LARC into the surf

Myra treated us all to a trip on the famous pink LARC. These aluminium-hulled amphibious vehicles are LARC-V (Lighter, Amphibious Resupply, Cargo – 5 tons in weight) and were built in the 1950s in the USA. Our tour commenced with a 50m drive down the road then plunged into the river and across onto the beach on the Eurimbula NP side, where we were treated to a knowledgeable talk on the birdlife. The passion and local knowledge of our driver was welcome on a wet and overcast day, even the kids got to drive the LARC along the beach, sometimes even into the water.

Back at camp we relaxed and talked, caught up on news, and even took my cousin Geocaching. The weekend flew by and before we knew it we were packing up once again saying goodbyes until we were due to meet up again further south.

In a cruel and tragic twist, after such a beautiful weekend, my Aunt died on the return trip and our plans rapidly changed. Whilst feeling totally empty having been robbed of such a beautiful person so suddenly, we were lucky to have spent some great time with her, and our memories of that weekend will be cherished by us forever.