Firstly thanks to all the responses helping with my computer. It probably won’t be fixed until we get home which means blogging will be less frequent and probably fewer photos for a while.

Waiting for the Jardine River ferry

After decamping from the beautifully tranquil Jardine River a short but very corrugated drive brought us to the ferry crossing where the 20m crossing costs you $129 and lasts barely a couple of minutes. It sounds expensive but is a return fare and does include the permit to enter the indigenous area as well as camping in designated areas around the tip of Cape York.

The freshwater spring at Somerset beach

Bamaga is a sleepy township in the far north, offering a decent sized supermarket, post office, tavern, bakery and general store amongst others. A hasty re-fuel and restock and we headed 35km to the north easterly point of the Cape, to a campsite called Somerset. The Somerset Homestead is now in ruins, established in 1863 by John Jardine, farmed cattle, copra and had other commercial interests that included involvement in the pearling industry. Near to the campsite there are some old cannons, gravesites and some derelict ruins providing the inquisitive with a glimpse into the hardships of the past here. Fragments of old hand-blown black glass bottles can be found scattered in the bush, many dating back to the late 19th century.

Along the shoreline, behind the mangroves you can also find the remains of an old freshwater spring that was pooled as salvation for shipwrecked sailors, and graves of Japanese pearl divers.

Also along the shoreline, after negotiating crocodile infested mangroves and climbing the sharp rocks some remarkable indigenous art can be found in a cave, considerably pre-dating the homestead. Figures of fish, crocodiles and turtles, as well as other unidentifiable shapes were all clearly visible.

Some 900m away the large island of Albany offers fishing charter holidays, but has untouched beaches covered in turtle tracks with crystal clear water. The island also offered some protection from the prevailing onshore winds that greeted us all the way up the east coast of the Cape. 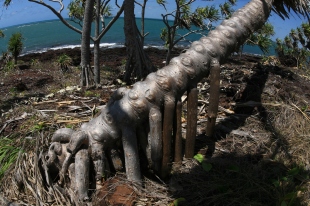 We explored the neighbouring coastline taking the five beaches track that weaves southwards through the bushland between beaches. We met another family with kids at SDEPS (whom we hadn’t seen for months) and took the photo at Fly Point of all the 8 kids. At the end of the track we found tracks that kept going and we explored at least two more beaches, the kids finding plenty of their new favourite shell, the chambered nautilus. Surprisingly there was less rubbish on the beaches here, probably because of the protection from Albany island.

The abundant and unique birdlife at the tip of the Cape York also provided an interesting diversion at dawn whilst everyone else was still waking up. The tally is now fast approaching 300 species on the trip and favourite birds have been changing regularly. Here the yellow-bellied sunbird was a welcome treat around the trailer.

The next day we had a challenge to meet, the third compass extremity of the mainland, Australia’s most northerly point. The dirt road wasn’t too bad, weaving at times through lush rainforest, before opening up at the beach. A short walk over the craggy headland past enormous rock cairns brought us to a very unimpressive simple sign at the northerly tip. Three down one to go!