Where the Hell is Noonamah?

Battle of Mindl Beach in progress 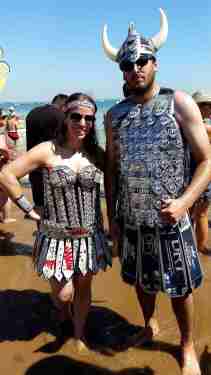 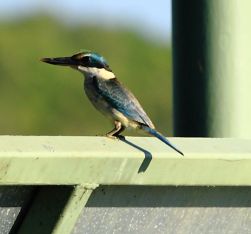 Practicing for the boat race

Boat race at the Regatta

Home of the “Big Stock Whip” though we never saw it, we decided to use Noonamah as a base to explore Darwin. Noonamah is not much more than a roadhouse, small caravan park, and tavern, but a convenient location near to Darwin.

The car needed a service, we wanted to see the famous Darwin Beer Regatta, and Oscar’s birthday was imminent so we booked a few nights, that ended up stretching to a week. Our first night in an unpowered site was a piece of land next to the highway, where big trucks pull over at night. We got the worst spot next to the fence and after a noisy night, including what sounded like some family violence in a neighbouring van, we upgraded to a powered site – what a difference. The other side of the fence was a lush watered grounds with bushes, and all facilities right next to us.

Even our friends the “Roving Reeves” joined us for a few days. It was great to catch up with Tash and Steve after so many brief meetings over the last few months.

Firstly, the Beer Regatta on Mindil Beach. Amanda was super excited, I’m not sure why but the mention of markets may have been the trigger. It was a particularly hot day, 33 rather than the perennial 31 degrees there, but very humid too. We arranged to meet up with Mike and Rhonda from Margaret River, Marty and Crystal too making it a very social day.

First up were the boat races. I must admit I was expecting craft made entirely from beer cans so it was disappointing to see many water craft only covered in a veneer of cans. They paddled around a bit, and everyone was having fun. Some locals had made impressive costumes from beer cans.

Next came Henley on Mindil, where teams of four people run up the beach carrying a frame vaguely made to look like a boat. The highlight of that was when one team had a massive crash, destroying their “boat” and avoiding any injuries. There was also a tug-of-war.

Then came the thong throwing contest and after seeing Amanda make a very average attempt I stepped up for the men’s event. There were so many people queuing to have a go that it took 20 minutes to get a turn but when I did I unleashed a monster throw cruising into the lead by several metres. This lead was held for another 15 minutes when some determined youngsters finally surpassed the mark after a dozen attempts. Good fun and the gold coin entry fee went to a good cause.

The highlight of the day, the so called “Battle of Mindil” was supposedly a treasure hunt but at this stage it turned into a melee of boats trying to sink one another. One boat found the treasure, avoided all the fracas and snuck in to beach to claim their prize.

For us the day’s highlight was catching up with so many good friends we have met over the last few months. For Amanda, she got to immerse herself in the markets for a while too.

We visited the Darwin wave pool which provided the kids with some good entertainment for a couple of hours, and on other days we visited the water slides at Leanyer and Palmerston, both free entry which was unbelievable because in Sydney you’d pay top dollar and have to queue for 20 minutes for a ride. The kids kept going while we caught up with other families, “110 Around Oz” from Sydney, the “Grismacks” from Perth, and “Roving Reeves”.

The car service was a jaw-dropper. I had asked for a full service but knew I was in trouble when it took an hour to calculate the cost. Apparently the manager made them reduce it by $500 and it was still twice the original quote. It was good to get the clean bill of health though, knowing we had some serious dirt roads ahead of us.

For Oscar’s birthday we visited the Territory Wildlife Park, and visited Berry Hot Springs nearby with Roving Reeves. The park had a series of great aviaries, impressive aquarium exhibits, and we made sure we witnessed the bird show and feeding the freshwater stingrays. This park was a lesser known gem, well worth the visit. Marty joined us for home-made pizza dinner back in Noonamah that evening.

Then we had the trip to see the jumping crocodiles at Adelaide river. A short detour on the way there, to Fogg Dam, was rewarded with an impressive bird watching opportunity. As well as hundreds on herons and egrets standing shoulder to shoulder there were spoonbills, ducks, kingfishers and even water buffalo in the distance.

Before we knew it a week had passed and we hadn’t even scratched the surface of things to do in and around Darwin. We were getting too settled in Noonamah and had to move on again.