Our first night in Alice saw temperatures plummet to 3 degrees. What few warm clothes we had came out but it was actually quite nice as by 9am the temperature had risen enough to be comfortable again. With all warm clothes stowed again we headed out of town along the West MacDonnell Ranges. 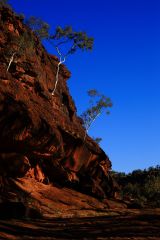 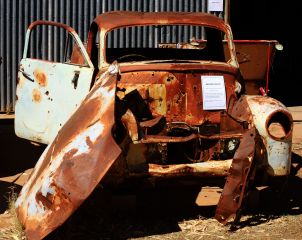 The gorge leading to Palm Valley

Porridge pot at the mission

Knowing it was a short drive for the day we made some impromptu unplanned stops as we went. First up was Simpsons Gap in the Tjoritja / West. MacDonnell National Park. Following the dry river bed towards the gap I was surprised to see “No Swimming” signs but at the gap there was a substantial lake full of icy cold water. A few black-footed wallabies hopped around the rock piles on both sides of the gap, looking down intently watching our every move. We also spotted plenty of striated grass wren jumping around the rocks and grass.

A little further along the road we stopped to have a look at the local indigenous artist, Kathleen Buzzacott’s studio. Everyone loved the deep bowls filled with coloured seeds, and running hands through them just felt so good! The kids were interested in the jewellery made from the seeds and then watched intently as Kathleen showed them how to dot-paint. A very interesting stop that inspired the kids drawing efforts that afternoon in the car.

Hermannsberg was established as a Lutherian Mission in 1877 by two newly arrived missionaries from Germany. Their trip alone to the area was a marathon of hardships and drought, having being despatched in mid-summer. Today the mission offers an insight to outback life in the late 19th century. The kids marvelled at the size of the porridge pot, particularly as we all ate hot porridge for breakfast. We also learnt that in the indigenous language, Arrernte, there are only four number words, for 1,2,3 then everything beyond this is “a mob”. The kids struggled  trying to grasp the concept, but an apple strudel was beckoning us in the café so we moved out of the school.

Just on the other side of Hermannsberg a dirt and sandy road led us up to Palm Valley. Having grabbed a campsite we decided to visit the valley before sunset and set off up a very rocky 4WD track to the start of the walk. It was slow and bumpy and the sun was falling fast but we all managed to make the 5km loop walk , then negotiate the track back down before nightfall. The deep-rich red colours of the valley rock walls were amazing to see as the sun dropped further in the sky, and to see Cabbage Tree palms nestled in the valley was interesting as the 2,000 odd palms are an isolated population, their nearest relatives being over 800km away in Queensland.