After Skippy Rock we arrived late at Normans Beach in Two Peoples Bay (the other person being Betty) to grab the last spot in the campsite. Amanda came face to face with the biggest Dugite we have encountered yet. At almost 2m long we witnessed it hot in pursuit of a big black skink, chasing it up a tree. When the skink could go no further it leapt out from about 3-4m, belly-flopped onto the ground and scampered off. The snake exited the tree equally ungracefully and chased after it, as we all took a big step back to watch the action unfold before us. 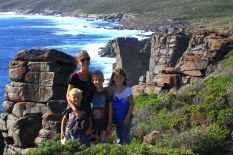 With little camping close to Albany we drove to a cute little place, appropriately named Cosy Corner and ensconced ourselves for a few days to explore the area. We enjoyed Albany, visiting a few times, for library work with kids, shopping and a bit of geocaching and exploring. A nice sized town, big enough to have all we needed but not too big to get lost in. Xavier became the expert in finding nano-sized geocaches though we were beaten by one near the Opera house.

Fishing was pretty quiet along the beach despite the fact the salmon run is due any day. We checked out nearby West Cape Howe national park to see if the fishing was better there but despite the numbers of fishermen it was still a bit quiet at Shelley Beach. I noticed a 4WD track into the park that proved quite  challenging, but we were rewarded with magnificent vertical black granite cliffs at West Cape Howe. Being late in the day the family didn’t want to risk going further in the sand – they still don’t have faith in the trusty Pajero, even after 4 months.

As a cyclone bore down on the north west coast of WA we started getting a bit of rain. We drove around Torndirrup National Park near Albany, and some brief intermissions of sun allowed the kids to enjoy the azure waters of the beaches in Whaler Bay. Salmon Rocks, rather appropriately, had yielded two monster salmon for one fisherman, and we watched another battle a large eagle ray to the beach where it snapped his line. The old whaling station nestles into the end of the peninsula with a large whaling ship on display for exploration. In Frenchmans Bay, we drove to a bird hide to try and add a few new birds to my list (buff banded rail was the only one) and catch a geocache. Luckily for a guy down there we showed up and got his car started for him in a very quiet street. Another attraction there were the blowholes that, despite a small swell, roared periodically, giving everyone a bit of a scare the first time they went off. Throw big swell and water into the mix and they would be quite an impressive spectacle. The natural arch was closed unfortunately.

At night we got frequent visits from an oversize bandicoot and Cosy Corner was a popular venue for the kids with hideouts abounding in the bush.