After ten relaxing days at Le Grand campsite we felt the need to keep moving. We haven’t been in WA for long and there is so much to see. We had a big dinner in the camp kitchen on our last night with our new friend Jackie cooking up a delicious Thai green curry. It was a lovely evening with great company. We’d seen so many great people and the kids had had loads of playmates. 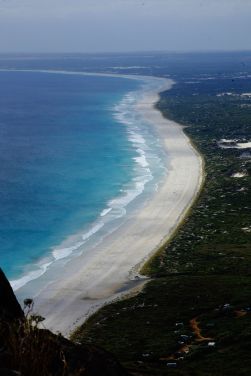 We had also found five species of snakes, most of them passing through our site, tiger snakes, dugite, python, ringed brown snakes, and another short plump brown snake that our neighbour Rob nearly trod on.

Having had ten days of poor fishing we had to go to Stokes Inlet where we had been told you can catch your bag limit of black bream in 15 minutes. Stokes National Park was a short drive west and we set up camp before heading to the infamous Young River. Hannah had caught 3 fish before I could even get a line in the water, though nowhere near the fabled 40cm length that inhabit the waters. Everyone managed to catch several before Oscar hooked a big one that snapped his rod that he bought with his own money only the previous week. He was so distraught but still managed to land his 28cm fish for dinner. Oscar’s challenge complete again, catching and eating a fish.

With Amanda keen to get to Albany to pick up the kids schoolwork we were up early to head for Albany. Unfortunately for Amanda my curiosity took us down a 4WD track to a place called Skippy Rock. The campsite, perched above the beach was deserted except for a very friendly camphost, and we decided to stay. Roy, the camphost, took us fishing, and I caught two lovely fish for the BBQ later, a 44cm flathead and a 39cm silver trevally. No photos but they tasted delicious.

Roy was full of stories and despite being a mad keen fisherman, he was a gold prospector from Kalgoorlie who had even starred in a recent movie, Goldtown. He even had some small pieces of gold to show the kids. Everyone wanted to stay longer but schoolwork was beckoning and we were two days into the new fortnight.

4 thoughts on “Farewell to Le Grand”