West of Eucla, we stopped briefly at Cocklebiddy and headed down to the Eyre Bird Observatory. The road to the escarpment was pretty rough but we had to unhitch the trailer to get the last 12km to the observatory. The road was very soft and sandy, making it a fun ride in. 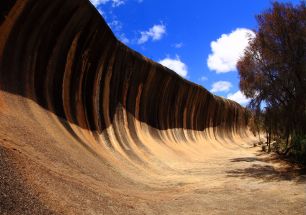 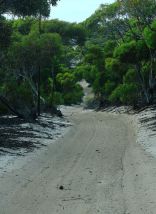 Sand track into the observatory

The Original Telegraph Station at the Eyre Bird Observatory

Whilst very little remains of the original telegraph station (1877-1897), the later built telegraph station now acts as a tranquil rest for bird watchers and bushwalkers. The caretakers showed the kids the weather station and took measurements, a task performed 3 times a day. The building also houses an interesting museum that the kids loved due to the amount of bones and preserved animals there. We had a quick bird-watching bushwalk and headed down to the beach, over one of the most challenging dunes we have encountered yet. The beach was tough driving so we made a hasty exit and departed.

The explorer, Edward John Eyre, passed nearby in 1841, on his epic 1500km journey from Fowlers Bay to Albany.

Back to Cocklebiddy for an overnight stop, then saw an Australian Bustard (a bird, not a person!) in the morning before commencing a long drive to Norseman. This stretch saw us diverting to find Caiguna blowhole, driving for 20 minutes in the worst dust roads, only to find it back by the main road on our return. Tidal airflows blast through many such blowholes on the Nullarbor, some over 70km/h. Jumping into them offers instant air conditioning on hot summer days. The next stretch of road is the longest straight road in Australia – 146km of boring driving.

Past Norseman we continued on towards Hyden via the Granite-Woodlands track, stopping overnight at McDermid rock. A brief stop at Disappointment rock was far from it! We watched a small bush fire working its way towards us, until it got within a kilometre, when we had to press on to camp before sunset. McDermid Rock is actually a mini-Wave Rock formation and an impressive sight, but to avoid disappointment see it before the Wave Rock. The road took us past the Breakaways, another obligatory stop offering more rock formations and beautiful colouration in the rock.

Wave rock was impressive but quite busy. Having seen pictures of it as a kid growing up it was great to see it in reality. Well worth a visit.

2 thoughts on “Wave Rock, Hyden and other rock formations”