As we drove towards the Nullarbor Plain we couldn’t resist to stop for the road signs, look out for Camels, Kangaroos and Wombats. Pulling over at lunchtime the kids soon were running back to car clutching beautiful feathers, asking what they were from. A quick scan of nearby trees revealed a group of Major Mitchells, or Pink Cockatoos, beautiful birds and one to add to the list of sightings.

Climbing out of the caves

Zebra crossing in the Nullarbor!

Sunrise at the camp on Bight

Hot day on the Nullarbor

View from camp at sunrise

At Nullarbor we turned north off the road, to look for Murrawijinie Caves, lying approximately 10km along a dirt track. The temperature gauge snuck up to 46 degrees and was testing everyone. Why were we looking around in this heat in the bush for caves didn’t need to be said but the moment they set foot in the cool shaded environment below all was forgiven. I have never seen Amanda move so fast down a 3m log to get out of the heat. We found a wall with aboriginal red ochre hand paintings which proved quite exciting for the kids. In one cave we climbed down some tight passages until we found a large pile of bones, those of animals who had entered and perished after failing to find their way out. Many raptors roost and nest in the cool caves and so we found many rodent bones scattered in piles too, particularly beneath one owl nest.

After killing some time out of the heat we finally had to re-emerge from the caves and find a camp. We camped at the head of the Great Australian Bight, literally on the clifftops, not a place to go if you are at all susceptible to sleepwalking.

Up early and off again before the wind could blow us over the cliffs! We found a zebra crossing in the middle of the Nullarbor Plain (only a few hundred cars cross the 1600km plain daily) so we had to use it. After a couple more lookouts we decided to explore and drove off along an unsigned little track.

After 15km a myriad of diminishing tracks brought us to a homestead and a vintage car graveyard. We were looking for more caves but gave up eventually fearing our ability to retrace our route back along the tracks. But first we had to take photos and a GPS position to check where we had been later.

Finally we worked our way back to the main road and headed West again. Next stop West Australia!

Just as we approached the West Australian border a wild dingo calmly crossed the freeway in front of us. It was our first on the trip. We pulled over for lunch to eat some residual items that we knew would be lost through quarantine. 25km short of the border the coastline becomes a sloping descent rather than precipitous cliffs. Whilst a dirt road to the beach beckoned we gave it a miss and the kids had fun catching desert cockroaches in the car park. These insects were of herculean stature, buzzing past slowly everywhere. We swatted a couple for closer examination. 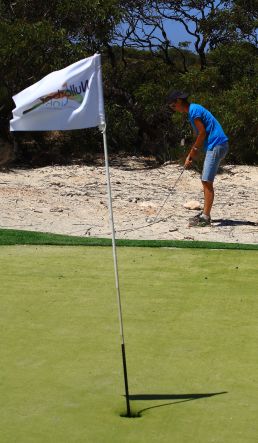 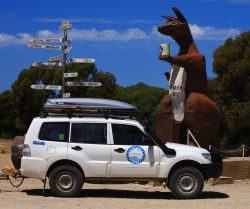 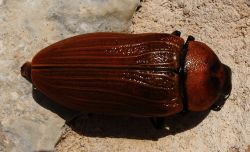 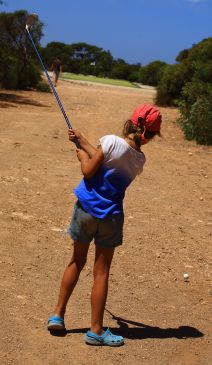 Oscar sticks to the fairway

At the border we decided to play another Nullarbor Links hole to relieve the boredom of long straight roads. The straight par 3 hole looked a doddle, but when the clubs were handed over without balls, “because everyone loses them”, we noticed the fairway was largely rocks and dirt and it wasn’t long before balls were ricocheting into the bush in all directions. Armed with two clubs, one for striking the ball, the other for defence against abundant brown snakes, we zigzagged our way up the fairway several times, as we all wanted a go and we only had two balls. Best score of the day, two over par, 5.

50m away as we crossed the border we had a good chat with the quarantine officers who spoiled the kids with chuppa chups. We surrendered the few remaining items we hadn’t been able to eat then drove through. Here we are in West Australia after almost 15,000km on the clock.