Ceduna and heading towards the Nullarbor

Ceduna was just a stop to fill up with water, clean up a bit, stock up with supplies and plan for the trip across the Nullabor. All but the planning were performed proficiently. We found a few spares that were required and spent quite a bit of time catching blue swimmer crabs off the jetty again.

Oscar on the fairway 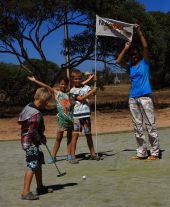 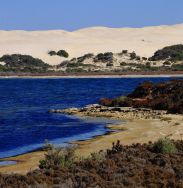 After two days in Ceduna we travelled the one hour or so north west to the famous surfing beach, Cactus, at Port Sinclair. The three main surf spots there are Cactus, Castles and Caves, all a short distance from the campground. The swell was small but there were enough waves to keep the surfers happy. Most impressive was the windsurfer catching the waves though. With no board it was frustrating just having to watch, but with two shark attacks in NSW in the last two days, and a memorial plaque for a surfer taken from Cactus in September 2000, I was happy to watch the keen ones surf beyond sundown.

The next day we went for a swim in a nearby salt lake and found a golf ball ready for the next challenge. We stopped in Penong for a hole of golf on the Nullarbor Links course, the longest in the world. With not a single blade of green grass to be seen we all launched in and I think the best result was a score of 8 on the par 4 hole. Challenge complete!

Next stop Fowlers Bay where we camped near the beach in the National Park. We all snorkelled and I fished one night/morning with limited success – still not sure what fish I caught and returned but think it might have been a small jewfish. Time to press onwards and into the Nullarbor.