The road from Marree to William Creek had now opened for the first leg of the Oodnadatta Track so we continued north. Amanda’s trepidation was clearly visible.

Who is looking at who?

Our drinking buddies at Marree 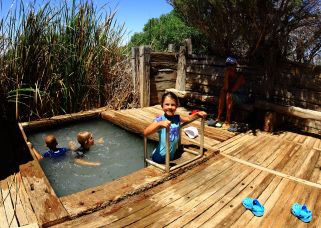 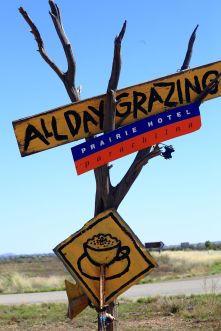 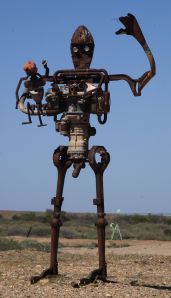 The first stop was Parachilna, home of the feral food or “Roadkill Café” at the Prairie Hotel, but it was closed for summer! Next stop the aboriginal ochre pits where the rock for painting is taken. Quite a few colourations were visible from white through to red and orange.

Farina ruins lies just north of Lyndhurst and is the ghost town of what once was a flourishing township of 600 people, with two hotels, stores, an underground bakery (restored and used once a month these days), church, stores and much more. Covering quite a wide area it is worth spending some time exploring. The campsite was uncharacteristically green and luxuriant for the area and had we not been on a mission we would have stayed there. Onwards to Marree, the start of the Oodnadatta Track.

With the temperature approaching 40 degrees we pressed on to the Marree Hotel, where we met locals from Roxby Downs, Tim, Tony, Rachel and Sandra with whom we shared a few too many drinks and got some great local knowledge regarding swimming holes along our route. The Marree Hotel was great – we even had dinner there but soon enough dawn arrived and we had to leave.

The Oodnadatta Track is 600km of unsealed road from Marree, via William Creek, Oodnadatta to Marla best suited to 4WD vehicles that follows the course of aboriginal trading routes and the old Ghan railway. The track passes many remnants of the railways former glory days and the springs that made the route passable on foot for aboriginal traders.

Shortly after we started the track we witnessed brolga cranes, then some fantastic metal sculptures strewn across an artists property (in the middle of nowhere), then our first proper stop was to view Lake Eyre South and we could clearly see water fairly close to shore – it was starting to arrive again after local rains and storms in Queensland which feed the lake from the north.

Next stop was the waterhole at Margaret Creek, flowing quite quickly towards Lake Eyre South. The fun here ceased pretty quickly when the kids went under the road, on inner tubes donated by Tony and Sandra, and flushed out a swarm of mosquitos that appeared to have been fasting and awaiting our arrival. If that wasn’t bad enough Oscar dived in hit a rock and gave himself a massive “egg” on his forehead that made him look like Cyclops. Before we left though we had time to witness the hordes of fish and prawns relishing the renewed water flow. The kids were picking them up in handfuls. We left with mozzies in hot pursuit.

Mound Springs were set in an unusual, almost lunar looking , white landscape devoid of plants. The springs emerge from mounds that sit in this landscape that present little oases amongst what appears to be barren surroundings. Desert gobies dart for cover amongst vegetation in the rivulets that emerge from the springs. The Big Bubbler belches up mud rings from its centre and water cascades down it’s rocky sides, whilst nearby the Blanche Cap seeps quietly through the sides of the mound. It was getting hotter by the minute so we drove on to Coward Springs. This turned out to be one of our favourites. A little walk through the bush, squeeze through a hole in the bushes and you arrive at a 2m square spa backing on to wetlands. In the close 40 degree heat this was a lifesaver, but I’m not sure how it would cope with a full campsite trying to access. No mozzies there. Onwards to William Creek.

2 thoughts on “The Oodnadatta Track – part 1”