Innes National Park occupies almost 100 sq km of land at the bottom of the Yorke Peninsula, due west across the Vincent Gulf from Adelaide. It used to be a favourite haunt of mine so it was a pleasure to take the family back.

Emu on the Beach

Roos on the road 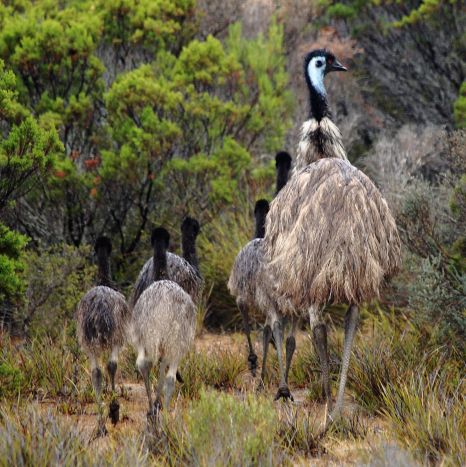 Thankfully little has changed in the time that has past since I last visited. Surprisingly, only a handful of people were actually staying in the park. On our way down we had a quick close-up of the emus in an enclosure at Minlaton, but just as we entered the park we were greeted by an emu and two chicks strutting by the side of the road. From then on families of them were encountered at what seemed like every bend in the road, with anything from two to six youngsters, even marching towards us on the road at one point.

Shingleback lizards were to be found regularly, either by the side of the road sunning themselves, or rustling through the undergrowth around the camp at Pondalowie. The first one the kids found was infested with reptile ticks and Hannah insisted we remove them all with tweezers, for which the lizard appeared to be grateful, sitting patiently as they were removed one by one and professionally squashed by Xavier.

Ethel Beach is named after a shipwreck in 1920 whose rusting iron carcass still protrudes from the sand above the high water mark. In the shallows nearby lies another wreck, the Ferret, that used a rope tied to the Ethel wreck to save its passengers. After exploring a few caves at the end of the beach it was time to go fishing and looking for shells at Shell Beach. By the end of the day Hannah had caught three fish (sweep and zebra fish) and was happily baiting her own hook casting, landing, and even trying to unhook them herself. I caught a salmon for dinner off my favourite rocks, and Amanda and Xavier had accumulated a nice collection of shells.