Unfortunately with a deadline to meet for another ferry we had to rush from Ewens Ponds up the coast.

First stop was Carpenter Rocks where a bright red lighthouse at nearby Cape Banks alerts passing boats to the treacherous limestone rocks that line the shore. This spot was where in 1802 English Botanist Joseph Banks and Frenchman Nicholas Baudin passed one another as they mapped the coastline. A shipwreck on the beach and witnessing an unfortunate diving accident when we arrived all reminded us of how much respect the rugged coastline here deserves. We did witness a big fur seal haul itself up onto the rocks at dusk then disappear into a craggy hole to rest for the night.

Heading north we flew through Mount Gambier but not before I showed everyone the Blue Lake, a remnant from ancient volcanic times in the region, and a few of my old cave-diving haunts, like Allendale East, where the road splits either side of the cave in a tiny town, Little Blue and Fossil Cave.

We stopped in Little Dip Conservation Park, literally, because we got bogged deep in sand on the coastal track. After two hours of digging and making slow progress, with several kilometres still to go, and Christmas Carols beckoning in nearby Robe, I had to concede defeat and turn around. A good learning opportunity for the kids that they responded well to, but we sustained a significant ding to a panel on the car trying to turn it around. We made the carols and enjoyed a rare treat of fish and chips.

The next day we back-tracked to the Coonawarra to meet the Prof at Majella Wines. We got a tour around the winery and an obligatory tasting. The first wine in 2 months for me and it tasted magnificent.

Stocked for Christmas we headed up to Naracoorte to visit the World Heritage cave site and visited the Victoria Cave where a massive bone deposit of Australian animals, including mega-fauna, lies documenting some 350,000 years of history.

Then back to the coast, along small roads, watching emus running through the fields as we went, to see a big icon. The Kingston Big Lobster is an impressive construction, that we spotted from some distance out of town, lurching above the treeline. 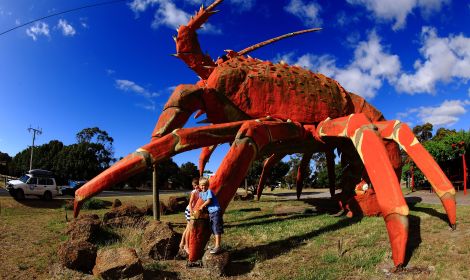 It was late but we were keen to stop in the Coorong and we pressed on up the coast arriving much later than normal at 42 Mile Crossing. After a late dinner, the kids went to bed as dusk fell and I noticed we had a visitor. I set the camera up to catch him, came oh so close and got within 2 metres of him, but my flash scared him off before the shutter went. Waking up the next morning 2 shoes were missing, courtesy of Fantastic Mr Fox! It couldn’t take a pair but nicked one of Oscars and one of Xaviers. If I hadn’t retrieved Hannah’s before I went to bed it could have been the set! We found some foxes earths around the campsite but no sign of the shoes.

Next day we headed north to explore the shores of Lake Alexandrina, where the river Murray meets the coast. The birdlife was fabulous and we spotted quite a new species for the twitching list. At Narrung we caught a ferry across one part of the lake to Point Malcolm, which hosts the only inland freshwater lighthouse in the Southern Hemisphere, that was used when log barges used to ply the waters.