Having been diverted off the Great Ocean Road to hunt the Black Snail we resumed the road heading for Cape Otway where Hannah’s teacher had given us maps guaranteed to locate Koalas. It was late in the day so we went straight to the Lighthouse and set up our camp there. Despite all the tourists visiting we were the only ones staying there in a very picturesque outlook just behind the lighthouse.

We enjoyed the tranquillity so much we stayed two nights, and there was plenty to do there.

This was the first lighthouse we have had the chance to go inside and we had the privilege to meet Pat, a lighthouse man, and a dying breed now all lighthouses are automated. He was not shy sharing a few stories about peers who had been driven mad by the solitude, and one as recent as in the 1980’s who had to be subdued and tied up with ropes when he ran around the island trying to shoot everyone. On the trip back to the mainland he was strapped to the main mast to stop him terrorising the crew.

He showed us the narrow platform they used to clean the windows from with no rails or safety gear, over 60m up. In strong winds he joked that he would make the assistant clean on the windy side. Having been the last lighthouse keeper at the Point Hicks lighthouse that we visited in Croajingolong it was fascinating listening to his stories for an hour so in the afternoon. Thanks Pat. 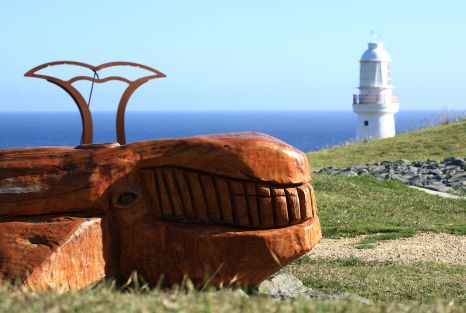 The next day we visited the aboriginal hut hidden in the bush and met Dale. We spent hours with him talking about traditional plants, medicinal and bushtucker, how the traditional hunting weapons were used and he gave us insight into the native countries, tribal structure, how each tribe speaks 4 languages, and how message sticks were used when entering neighbouring territory. The kids painted abalone shells and we spent many hours there. Thanks Dale for sharing so much with us. It really made the stay special meeting these people.