Time to hit the goldfields – we found an awesome camp in the forests to the north of Ballarat then hit the Sovereign Hill centre to find out about life in the Gold Rush in the 1850s. 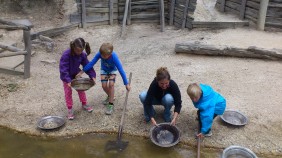 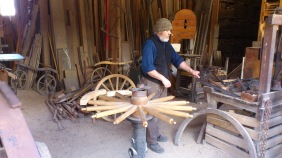 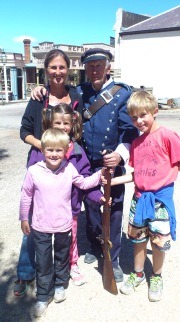 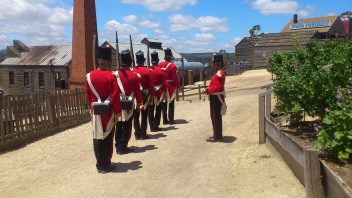 Muskets and enfield rifles were fired, we climbed down into Red Hill mine, watched stagecoaches ride past, panned for gold, and even found a few specks in the stream (they put 3g of gold in each day for the tourists to find).

The kids were horrified watching the school kids who were participating in the whole thing, dressed in 1850s uniforms, attending classes, and raising caps to adults as we passed by. The school lesson was brilliant as a very stern teacher made year 3-5 kids recite poems over and over again until they got it right. Funnily enough I had flashbacks to my childhood and the eccentric English teachers who had similar approaches.

We watched a 3kg gold ingot get poured, boiled sweets being made and to finish an excellent day we visited the gold museum to find that we were camped in the middle of the gold area. We had noticed a handful of little tents squirreled around the hills in the forest but there is still a lot of gold fever there. One guy who had obviously had some luck drove past in a Mercedes with new caravan and license plate “TWINKL”.

Tempted we pulled out the shovel and gold pans to have a go, but soon gave up realising that thousands of people have tried before us, and we could have spent months there without finding anything. We gave it a go though!