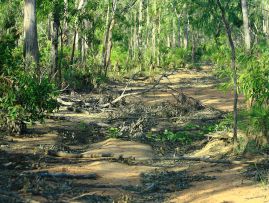 The road to Goanna Lagoon

From Giddy River we relocated to Maccassan Beach as a base to explore the surrounding area. One of our permits gave us access to the Dhimurru recreational areas to camp and this area includes a number of sites along the coast. Some 15km off the main, but unsealed road into Nhulunbuy, a signposted track leads you to a beach called Little Bondi. The track to the beach was tight and scratchy increasingly enclosed by bush on all sides as you approach, then soft white sand. I stopped short so we could check out the camp spot but despite the tranquil location it wasn’t deemed good enough for Fifty Toes Walkabout! Somewhat surprised by the decision we moved to turn around, but we had other beaches to check first. The only way out was to drive further onto the sand and we got bogged. With tyre pressures reduced even further and the recovery tracks in place we freed and after a nervous drive down the beach executed a hairy turn the soft sand, then back down to the hard stuff. Next stop Turtle Beach. This was a tiny beach with a couple of sheltered campsites. It looked great but no sun for our solar panels. The final spot was Maccassan beach, perfect for us with plenty of space, a few trees offering plenty of shade and plenty of open space and a bigger beach. The bauxite rock platform even promised fishing opportunities, but the onshore wind had built up and didn’t look like abating soon.

Nearby there was an interesting sacred site, unlike any other we had encountered to date. A fleet of up to 60 Maccassan trading boats from Sulawesi used to travel to this area on prevailing trade winds in December each year, for centuries up to 1907, to trade knives, tools and food for Trepang, or sea slugs. Each boat would carry up to 40 men and the 1,600km journey would take two weeks. The return leg would take place when the trade winds turned in April, often engaging local Yolngu people in the process.

The site consists of bauxite rock placements representing details of the trading interaction. Sections of the trading boats, called Praus line the ground in detail, others show the style of fireplaces required to boil the trepang, and fish traps.

Regulations imposed by a wary government in 1907 required these boats to register for tax in Darwin first, and trade winds couldn’t get them there so the trade ceased. The site consists of bauxite rock placements representing details of the trade. The rock placements are the only remnant of that ancient trade.

Bauxite is everywhere and for this reason Rio Tinto Alcan have a mine here. As a by-product of the mine’s presence in the Gove Peninsula Nhulunbuy is the sixth largest town in NT with a booming population of just under 4,000. Infrastructure is quite advanced for such a remote area and the hospital looked large for the town size.

The beach proved interesting, each day new tracks revealed nocturnal visits by crocodiles, turtles, and a few unknown creatures. Xavier and I walked to Turtle Beach past a billabong that was teeming with juvenile cane toads. You couldn’t help but tread on them with each step but too many to be able to do anything about them.

We took a drive to Rainbow Cliffs, then onto Goanna Lagoon. The road was comical because the original road runs direct into the bush but is crossed by tree trunk after trunk, brought down in recent cyclones, making the direct route impassable. Instead you have to zig zag your way constantly crossing the road at right angles to avoid the trees. Perseverance with the drive is rewarded with an opportunity to jump into crystal clear cooling waters (once you’ve checked for crocodiles of course) and the kids made the most of it.

We visited the exclusive art centre at Yirrkala where local artist’s work is showcased in an immaculate gallery. Whilst beyond our budget some of the artwork here was of particularly high quality, and the church panels in the museum gallery were a labour of love that took months to complete, depicting many of the cultural traditions. The Yolngu culture here is very strong and the people look so much more relaxed and comfortable, possibly because they have ownership of their own land and appear to be more in control of their destiny than in other areas we have seen. That said there are still many issues surrounding family, alcohol and drug abuse that one is constantly reminded of by posters around town, at the festival, and in local papers.

Then we explored the empty town beaches, starting at the refinery jetty where we watched dolphins and fished unsuccessfully again. Woodys beach was a hit, offering another safe swimming option in an enclosed but shallow area. A sandbar offered a walk to an island but with an incoming tide and a deep 4m wide channel to complete the crossing, we stopped. The next few beaches were deserted too and equally nice but we had a booking i.e. another permit to visit Cape Arnhem