Our new friends, Helen and Matt the “Drought Breakers”, as they had quietly confessed, decided they would head out the next day seeking refuge inland. We suggested that they might seek government funding to tour some of the inland farming regions that are in dire need of rainfall. Another family, from Perth, the “Grismacs” that we had shared dinner with also decided it was a better option to get out and seek drier conditions, despite having paid for five nights. The next morning the campsite evacuated leaving us with only a couple of other neighbours prepared to wait and see, monitoring the conditions. This was pretty hard without any mobile phone reception, so we were relying very much on updates from our camp hosts. 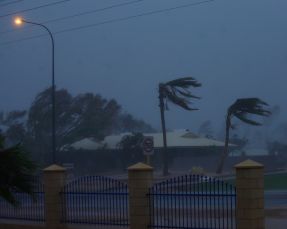 View through the window

Later that day “Roving Reeves” arrived, having pre-booked five nights at Osprey Bay. We had met Natasha and Steve at Francois Peron national park and the kids had got on really well. We had evening drinks in their luxurious caravan, after a late afternoon snorkel in perfectly calm conditions.

We could see rain and lots of weather to the west and east, but it looked like we were going to dodge it. Before going to bed it was supposed to be heading south crossing the coast at Coral Bay.

The rain started at 2am, with the wind strength gradually rising constantly shortly after. By 5am I was up in the driving rain hammering pegs in harder to keep the awning up. Ironically, I had bent three pegs driving them in as the ground was so hard when we had arrived but now, with a bit of rain, the ground softened very quickly.

At 5.30am Dennis the camp host was driving around in the dark telling us all to get out at daybreak as Cyclone Quang had changed direction and was now going to touch down at Cape Range and Exmouth.

De-camping was ridiculous! Driving horizontal rain soaked everything, and packing down the awning was like wrestling with an angry dragon as canvas flapped and whipped in all directions. Steve “Roving Reeves” very kindly emerged to help us complete the task, stating that they would probably sit it out, but by the time we left, 30 minutes later they had been told they had to go.

We headed out of Cape Range, hoping the roads hadn’t flooded yet, towards Exmouth, hoping to find refuge there. The wind and rain got worse and worse, and we slowed down to 60km/h. In Exmouth we had a unit booked to spend a week with the in-laws and we were lucky to get early access. Like drowned rats we all poured out of the car and into our new luxury home.

It got worse and worse, the unit started leaking then all power went. We waited and watched through the windows, then suddenly by early afternoon I heard corellas squawking and flying around. Thinking it might be the eye of the storm we stayed put but by 4pm we had glorious sunshine again, enough to open up the trailer to start the drying out.

Without power in the unit we had to transfer all our new shopping into our super reliant and trustworthy Eva Cool fridge-freezer in the Camprite. Some eight hours later it resumed, though half the town still had no power the next day.

Luckily the cyclone was diffused quickly by another weather system that collided with it, resulting in it passing with minimal damage. An interesting experience indeed for Fifty Toes.