Fuel is expensive on Fraser island, as much as $2.15 a litre (a good 90 cents cheaper than back on the mainland). We had come well prepared with an additional 60l in Gerry cans, but on the day we left I was doing calculations to see whether we would need to buy some diesel to get off the island safely. It was 65km from the camp back to Hook point where the ferry left from and then almost 10km back from Inskip Point to Rainbow Beach where there was a petrol station. Taking off our confidence was high as the sand below the high water mark was not at all soft, but with a tide coming in fast the last few kilometres were challenging. We had no fuel for backtracking and chose to continue along the beach rather than take the soft inland track to the ferry. The last few kilometres are particularly soft and challenging and fuel economy plummeted, then my heart sank when we saw that the tide had reached the dead trees that litter the beach near the point. With a quick weave between trees above high water mark and a last sprint across the sand as the waves receded we made it. We didn’t want to become another Fraser Island automobile tragedy today. No cars came that way behind us on that tide.

A full capacity 80l of diesel was required at Rainbow Beach to refuel, proving our calculations may have been a little too close for comfort on this occasion.

Next stop Mitsubishi in Gympie to find out why the transmission warning light had been flashing for a week. Pacific Mitsubishi had an engineer, Tom, who generously came out of the workshop to look at the car, plugged in the diagnostic computer and told us we were stuck in 2WD due to a switch failure. Had we known this on Fraser Island we might not have been so adventurous with our exploring, but it proved the Pajero is a truly a workhorse that could conquer the sand in 2WD, never even coming close to faltering. Tom gave us top customer service – thanks very much Tom. 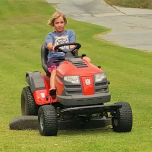 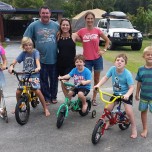 With Charmaine, John and kids

We pressed on to Tewantin for a couple more days with my cousin, where we walked out to Hells Gate in the national park and Amanda got to shop on Hastings street

Then it was on to the Gold Coast to catch up with a long-time friend of Amanda. Charmaine and John have a resort style pool that kept the kids busy for several days and a sizeable piece of land that Sydneysiders only dream of. The kids even got to ride John’s mower (some work had to be done to pay for our stay!).

We caught up with Amanda’s relatives too who live in the area, those we never see as often as we should, and had some quality family time with them.