Soon after a restock, and refuel stop in Kununurra we headed south for Purnululu National Park, or the Bungle Bungles. Stopping briefly at an overnight rest stop where a little spotted snake visited our camp, we headed onto the fairly corrugated road early next morning. We past a Ford Triton with three wheels in a dry creek crossing, another victim of the corrugations, and set up camp. 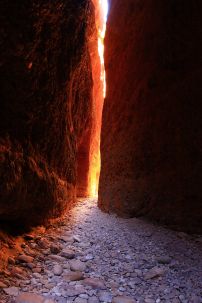 View through the Window

The Bungle Bungles are irresistible and unforgettable. With every twist and turn of the painfully corrugated road going into the Purnululu national park you are looking for the famous orange and black stripey beehive shaped hills. When you finally get there, at least an hour’s drive from the highway, the sheer magnificence of the outcrop demands that you stop and absorb the visual feast for a few minutes. It’s nonsense to believe that it can only be appreciated from the air and many of the walks within the park allow the visitor to appreciate the narrow gorges and other gems hidden from an aerial view.

We chose to spend our limited time in the park exploring, as usual, as much as possible, which meant a lot of footwork. Eight months into this trip our footwear was looking pretty sorry for itself and we are all promising that the next big city, Darwin, will bring new shoes. Xavier has even resorted to walking barefoot through some rocky gorges, whilst the rest of us hobble through with runners sporting gaping holes in the sides or sandals with more holes than when we bought them.

Echidna Chasm is a narrow gorge, in some sections barely a few metres wide, hidden behind a stand of palm trees, that penetrates a bastion of rock for hundreds of metres. A resident great bowerbird has its bower on show right next to the footpath near the gorge entrance. These ritual display sites are artistic masterpieces, built and used by the male to attract a mate. They run back and forth through the arch made from carefully positioned upright twigs. At both ends the bower is decorated with silver, white and green artifacts, the latter placed either side of the bower entrance. Often white objects will also be placed in the centre of the bower. Broken glass, bones, plastic, snail shells, tin foil, paper, seeds and even metal pipe can be found lying amongst the debris. The kids have tried placing yellow flowers amongst the objects and watch in delight from a distance as the bird grumpily discovers and removes them promptly.

For a couple of hours around midday a shaft of sunlight penetrates the gorge, and the resulting warming orange glow is a visual spectacle not to be missed. A chamber inside the gorge lights up at this time making it a popular place for photographers. Beyond the chamber the narrow gorge continues to wind its way through the rock but becomes impassable due to massive boulders.

Travelling back south from here we stopped to walk to Mini Palms gorge, again accessed via a palm forest concealing the entrance.

At the other end of the park lies Piccaninny Gorge, and within this area there are a number of walks. An easy introduction was a 400m walk to the Domes, ending at a small murky puddle in an enclosed chamber. Despite looking hard we couldn’t find the rock art here. Further down the track was Cathedral Gorge. Xavier counted 37 dead cane toads in the dry creek bed, solid evidence of the alien invasion that the Kimberley is experiencing, and destroying the local fauna. The pool at Cathedral Gorge was bigger but equally uninviting due to a layer of scum on the top. Bored tourists tossed stones into the pool to break the scum layer. The immense rock roof, supported only from the surrounding walls, almost totally encloses the space, giving it that cathedral feeling.

Beyond Cathedral Gorge, some longer walks take you up Piccaninny Creek, and Snake Creek. Piccaninny Lookout and the Window were all we could manage before I realised I had misplaced my camera tripod. Despite retracing my steps without luck, our time here had run out and we had to leave the park to head south.

3 thoughts on “Bungle Bungles (Purnululu National Park) and beyond”