Our first fuel stop was Mount Barnet and we chose to stay a few nights here. Shortly before we arrived there though there was a small detour to take to visit Galvans Gorge. More like an oasis, water was pouring, rather than cascading, down a boab-crested cliff face into a grass-lined swimming hole. To one side a tree trunk leaned out invitingly for the kids and a couple of ropes dangling from the branches lured anyone with any sense of adventure. The pool was over 4m deep, possibly more, and though it was early, it was irresistible. In we plunged. First we jumped off the rocks then we graduated to the rope swings but we all had a blast. To one side of the cliff we found an interesting piece of Gwion art, an owl-like figure looking very feathery, with a couple of serpents to the right of its shoulder. Already we were recognising a few people travelling the same way and we shared a campfire with Marty and Crystal (travelling in an unmistakeable red and white Landcruiser troop carrier). Marty had been on the same boat watching whalesharks in Exmouth!

Camping next to the river, the gorge was accessible by a punt attached by rope to a pulley. With a sandy beach and clear water, and pandanus tree-lined riverbanks this was very attractive to the kids who spent hours swimming and ferrying walkers to and fro across the river. Once across the river the walk was approximately 2km of undulating terrain, with some rock hopping toward the gorge end. Some rock art greeted you as you entered the base of the gorge, though many walk past without noticing the faded shapes on the cliff walls. The falls were big here too, falling directly into a very deep pool that offers multiple rock entry points catering to all, from water level up to maybe10m or more in height. Under the waterfall, a couple of metres up the rock we found a brown tree snake curled up in a crevice that looked to have no exit other than down to the water. The second time we visited the gorge Oscar and I took inner tubes a pump, basic fishing gear and our lunch, with the intention of travelling the hard way down the gorge i.e via the water. We ate our lunch at the falls, inflated the tubes and once I convinced him there were no saltwater crocodiles we set off. With a considerable distance to go and not as much current as I had hoped we had to stop periodically to warm up in the sun, and we used this opportunity to fish in some of the deeper pools. Oscar was landing a few good sized black bream before I could even explore the cliffs behind. It took us half a day to get out but it was an excellent adventure for the both of us. On the second day the station were restricting fuel to 50 litres per customer due to a delayed fuel tanker, and this dropped to 25 litres by the time I arrived to get some. Despite assurance the tanker would arrive the next day we opted to stay another night and enjoyed the riverbank one more time.
As we left the next day we took the opportunity to visit Mt Barnet Gorge nearby, a much quieter spot to camp and another gorge to swim in.

Finally, with supplies stocked to the gunnels, Gerry cans all full, we set forth from Broome to conquer the Gibb River Road. At least that’s what it felt like given we had prepared for 3-4 weeks away from shops and very few fuel and water stops.
The Gibb River road, heading north from Broome, commences just before you enter the town of Derby, and barely two hundred metres before the turnoff was our first scheduled stop to see the Boab Prison Tree.
At the same location is a historic cattle trough fed from artesian water sources, long enough to water several hundred cattle at once. 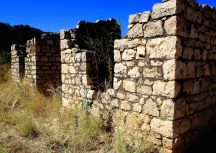 Crocs at night in Windjana Gorge

Turning into the Gibb River Road (GRR) the excitement levels increased, particularly as the road was primarily bitumen to our first camp at Windjana Gorge. My illusion of the GRR being a remote and isolated experience was shattered immediately as we drove around the camp looking for a site. It was busy and this was early in the season, and with a few exceptions the next few weeks didn’t change. From the Britz and Apollo hire cars and vans, through to the mainstream 4WD vehicles, everyone seemed to be coming through. There was even a Barina!

Windjana gorge is home to a population of approximately 150 freshwater crocodiles, so we were all keen to get our first croc sighting. A very easy walk takes you past cliffs of Devonian limestone encrusted with the fossilised remains of ancient animals, then through shaded forest for a couple of kilometres up the gorge. The crocs were there sitting on the beaches, not overly perturbed by our presence, and the sheer narrow gorge was breathtaking. Hannah even found what the ranger believed was a croc tooth on one of the pebbly river beaches there. A night excursion to the riverbank with a powerful torch revealed up to 100 pairs of eyes in one count on a short stretch of the Lennard River.

Tunnel Creek is a short drive from Windjana, a few hundred metres long, that can be traversed with the aid of a good torch, involves a little rock scrambling and a few shallow wades. It too has a population of about 6 freshwater crocodiles and we caught a couple of glimpses in the deep pools, but they sink into the murky depths as you approach. There is rock art at both ends if you know where to look and this was our first chance to see close up artwork, some of which has been there for thousands of years.

The story of Jandamarra is one that closely links the two sites together. As a youngster he was nicknamed “Pigeon” by his boss, and became a top horseman, shearer and a crack shot with a rifle. Working at Lillimooloora station he became good friends with a white man called Richardson. When the station later went bankrupt, Richardson joined the police force and took Jandamarra with him as a tracker. The two of them ended up tracking down Jandamarra’s own Bunuba tribesmen after they had resisted incursions by new settlers. Having captured most of the elders who had initiated him as a youngster Richardson chained them together for seven days, ready to collect a reward. After much pressure from the elders Jandamarra killed his partner, released the Bunuba elders and fled. Seriously injured in a battle in Windjana Gorge a week later he fled, taking refuge in Tunnel Creek for some years. On 1st April 1897 he was shot dead by another aboriginal tracker near the entrance to Tunnel Creek, by which time most of the Bunuba had been eradicated in the area by settlers. In Tunnel Creek there is an image of a pigeon etched into one of the cliff walls, for those who look close enough, a little reminder of the struggles that the indigenous people have suffered over the years.
What an interesting and fascinating start to our Gibb River Road adventure.