Coinciding with our visit to the Dampier Peninsula was the inaugural Essence of Ardi festival. We moved up to the resort at Kooljaman in Cape Leveque to be close enough to attend. Local musicians, artists and dancers, some from all over the country, were scheduled for 5 hours of celebration. 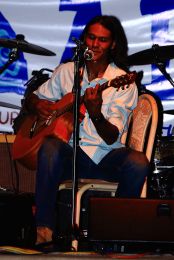 Cygnet Bay pearl farm were present selling delicious pearl oyster sushi, our friends from Goombaragin had a stall promoting not only their accommodation options but also demonstrating how to make clapping sticks. Amanda had a go but found that it wasn’t as easy as it looks, especially with a blunt hatchet. There were community stalls, some for alcohol and drug abuse, others with more positive stories highlighting how communities are getting better representation with social and corporate matters. One of the favourites with the kids was the Bardi Jawi Rangers stall that had videos of their involvement with catching and tagging dugongs in the Middle East. They gave the kids Ranger patches and were very keen to talk about their work with the local environment, and posters on their display highlighted some ambitious but important objectives over the next few years. Displays of local artwork were particularly eye-catching, especially a nautilus made from mother of pearl and ebony. Another local man displayed his ability in spear making, turning the shafts in the fire, and catering to two types, a fishing spear and a crocodile repellent / dugong hunting variety. A few food stalls were busy selling everything from bread loaves, cooked at the local bakery, to chilli mud crab, frozen ice blocks and lolly bags! Local celebrity, Stephen “Baamba” Albert acted as master of ceremonies, reeling off jokes and stories between acts. He played a part in the 2009 movie Bran Nue Dae. A local dance group kicked the entertainment off, the small group of schoolgirls performing a number of combined traditional and contemporary dances. Then the local bands were introduced, representing young and older generations. Albert Wiggins, who grew up at One Arm Point sang about his father and growing up in the area, and as with most of the acts had political songs for, or about, the prime minister, clearly showing their discontent with the way they have been treated. The Bardi Traditional Dance Troup came on later with three men tapping boomerangs and chanting songs (no didgeridoos in this region – just clapping sticks and boomerangs for music) as the dancers with painted bodies performed. Each dance to the uninitiated seemed similar in terms of steps, but the dancers held different patterned shields, obviously symbolic for each song. The last dance involved a hilarious character dancing at thrice the speed scaring children who had strayed onto the dance floor. The last act was Kerrianne Cox, from nearby Beagle Bay, a passionate and talented indigenous singer who worked hard on the youngsters in the crowd instilling pride in their heritage. As an inaugural event it seemed to be a great success, and the number attending would have pleased the organisers. Fifty Toes loved it and gave it full marks!