Coral Bay  was a short drive north from Waroora so we had to go and have a look. The caravan parks looked way too crowded for us so we headed out towards Five Finger Reef for a snorkel. The road looked very sandy so we quickly unhitched the trailer in the car park, let down the tyres and headed out. Luckily we did unhitch as the going got pretty soft and we witnessed a couple of bogged cars that managed to get out before they needed our assistance. 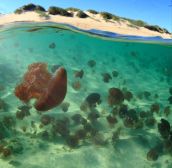 Some mindless fisherman had discarded a partially filleted reef shark on the pristine beach, but once in the water we were treated to beautiful coals and fish, even a dolphin cruised past the beach when we exited. A quad-bike tour roared along the beach and soon we were on our way again. The recent cyclone meant the Yardie Creek river crossing was out of the question so we took the long road back via Exmouth to Cape Range.

Our destination was Osprey Bay, only recently re-opened after refurbishment, about 10km north of Yardie Creek. One of the few places where land fishing was allowed, but also offering coral reef for snorkelling right in front of the campsite. Many hours were spent with the kids looking for lionfish, turtles, crayfish and much more besides. We saw leopard sharks, reef sharks, Hannah and Oscar even came back from a snorkel together boasting that they had patted a friendly turtle! We even had an invasion of jellyfish who came in one morning with the tide.

I explored Pilgonaman Gorge, and saw many black-footed rock wallabies. The walking is hard work and a 4WD is required to get to the gorge entrance. The hike up the gorge at Yardie Creek was easy for all of us and we got to see fruit bats, a western bower bird and dozens of budgerigars. We marvelled at the abilities of the rock wallabies who had scaled the gorge cliff faces.

The nearby site called Oyster Stacks offers great snorkelling between and around 5 oyster coated limestone pinnacles that jut out of the water at low tide. Whilst a little tricky underfoot to get in, a snorkeller is immediately rewarded with rich fish and coral life only metres from the shore.

Turquoise Bay is the next beach up the coast, offering more friendly, albeit less diverse, snorkelling from a sandy shore. Potentially dangerous currents are clearly signposted here so a quick briefing for the kids made it an enjoyable visit. The kids got their first close up of a shark, encountering two white-tip sharks.

Five days in Cape Range flew by, then we got the bad news about a Cyclone that had formed off the coast and was heading towards us. Our new friends, Helen and Matt, who we met at Osprey Bay confessed over dinner that they had a knack of being “drought breakers”. Wherever they go the rains follow.