Returning back down the Shark Bay peninsula there were a couple of spots that we also were keen to see. Amanda had been raving about Shell Beach since we left Sydney, how the beach was several metres deep in shells and how gorgeous the photos looked. It was almost ten metres deep in places, predominantly with salt tolerant fragum clam shells, the water being particularly salty in this part of the bay, but by WA standards the beach was nothing spectacular. We took some obligatory beach shots then moved on pretty quickly. 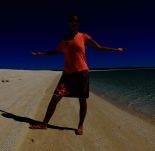 Having a closer look 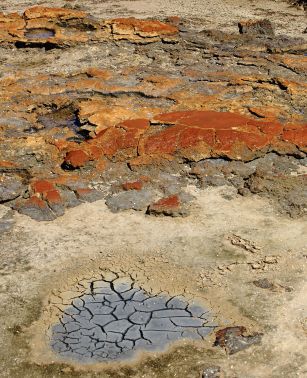 Stromatolites in the inter-tidal zone

Us at Shell Beach

Next stop was Hamelin Pool, a place I was keen to visit, having seen it in books as a kid, famous for its stromatolites.

Stromatolites are “living rocks”, microbial mat growths that grow very slowly upwards in the inter-tidal regions. At Hamelin the extreme conditions, high salt content of the ocean, heat and UV of the sun at low tide have made it hard for other life forms to survive and compete, allowing the stromatolite columns to grow very slowly over thousands of years.

A boardwalk takes you over the best area, providing optimal viewing. These were more impressive than the ones at Lake Thetis in Cervantes. Whilst they may just look like slimy algae-covered rocks the bacteria that form them are among the oldest lifeforms on Earth and would have been major contributors to the first oxygen in the atmosphere.

From there on to a very spacious beach location at Gladstone to camp, and endure more fly-blown madness. With all the flies we have been putting up the complete awning including walls and this just adds to the time to setup and de-camp, a nuisance when only planning an overnight stay.