Another short drive west from Lincoln National Park brings you to Coffin Bay National Park. Determined to keep up the adventure we decided to camp at Black Springs, the tides were in our favour so we drove down to Yangie Bay, deflated the tyres and headed on. We had a temporary bog that took five minutes to get out of then plain “sailing” from then on in, albeit quite rocky and rough in places. 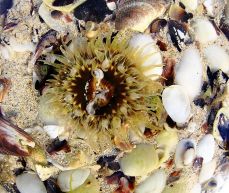 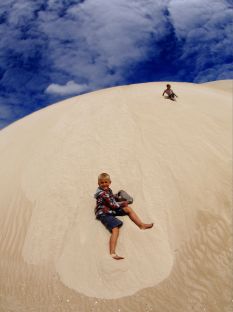 View from the camp

Dead Dolphin on the beach 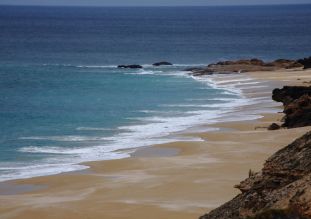 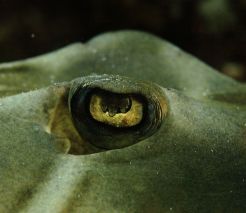 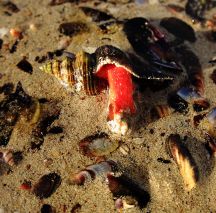 Despite being a very dusty campground, the site we chose was on the edge of a low cliff directly above the beach. With its own bench it offered glorious views across the bay to the east. We took the Black Rocks hike to Avoid Bay, a 3.8km walk across the peninsula. A large osprey nest perched prominently on top of a stack below the cliff and a pair of ospreys circled, one with a fish in its talons. The beach was really shallow and water warm so we spent some time snorkelling to cool down. Plenty of fish life but nothing big enough to catch for dinner without a boat!

We took one day with just the car to explore the whole National Park. There is plenty of 4WD fun to be had with lots of sand to Morgans Landing, then rocky to Point Sir Isaac where we watched sea lions and dolphins cruising up and down the coastline. Sensation Beach presented a dune that appeared to go nowhere from below, but in fact a right turn at the crest takes you down to a huge surf fishing beach. On our return we stopped at the big sand dunes beside Seven Mile beach and let the kids run up and down them for an hour.

A short excursion from the campsite to Black Springs Well was worth the walk. The hand pump finally brought forward a brown stream of water that did go clear, albeit full of organic detritus. The park also has a number of wells dug by 19th century Whalers which we found on our excursion around the park