Past more ruins of the Ghan railway’s former glory and then we arrived at Algebuckina Bridge.

Playing in the waterhole

Floating in the waterhole 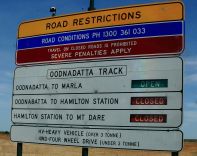 Only one way out

No kidding! 40 degrees plus 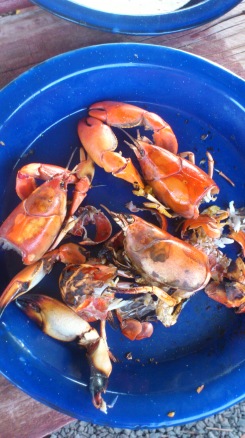 The road from Oodnadatta 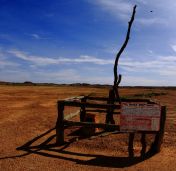 After a quick look at the bridge, because it was 42 degrees again and late in the day, we headed for the waterhole, less than a kilometre away on the other side of the road. This campsite got the big thumbs up from 80% of Fifty Toes due to the fact no-one else was there, we were right next to the waterhole, gorgeously deep warm water, fishing, and yabbying. Ok, admittedly there were a lot of pestering blowflies, but there were heaps of fish, even pelicans circling above. This was an oasis in an extremely arid place. Little prawns nibbled our skin as we lay in our inner tubes in the middle of the waterhole. Even as we left the waterhole only a few mosquitos were present.

Overnight a refreshing strong wind blew most of the night providing some relief from the heat, but as I emerged from the canvas in the morning the largest, most vicious cloud of mosquitos lifted from the outside of the canvas and within seconds threatened to engulf me. What followed was a record time decamp with everyone dressed in full length clothing. I missed the photo of Amanda in waterproof jacket, long pants in 33 degrees. No breakfast until we stopped at Dutton Ruins further up the road.

Our stop at Oodnadatta itself was brief. The sign says Australia’s hottest driest town and with 40 degree heat we were not about to dispute the fact. The Pink Roadhouse is the iconic establishment in a rather run down town. Back into the bush we encountered road hazards, flagged to warn oncoming dangers, then the Angle Pole. The bent pole, a few kilometres out of Oodnadatta, indicates the point where the Overland Telegraph Line and the Ghan both changed direction turning north.

From here we pressed on to Marla and witnessed a beautiful sunset and jumped in a pool to cool off. A bit rushed but a first glimpse at the Oodnadatta was fun and gave us a true insight to the hardships endured by early settlers and pioneers and the people who established both the Overland Telegraph Line and the Ghan railway.

2 thoughts on “The Oodnadatta Track – part 3”