The trip to Wolfe Creek was rushed due to a late departure from Purnululu, with only a brief stop at Halls Creek to refuel. The Tanami Rd was not too bad as unsealed roads go, though the last 20km once we turned off was back to “death by corrugation” torture.

We arrived just as the last of the orange sunset faded to dark. Clouds filled the sky concealing a full moon that re-appeared sporadically as the clouds passed by. 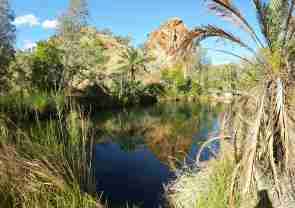 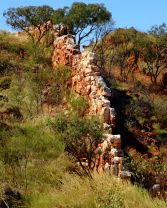 Wolfe Creek is the site of a meteor crater. Approximately 300,000 years ago a 50,000 tonne meteor smashed into the earth here, pushing the surrounding rock some 30-40m upwards on the rim of the crater. The rim itself is just under a kilometre across, and approx. 3km around. Given that this is a particularly flat piece of country makes the crater look all the more impressive. Known to the local tribes as Gandimalal, the crater, according to dreamtime stories, was formed by rainbow snakes emerging from the ground.

As dawn broke with the chattering of birds in the surrounding scrub I quietly left the trailer, grabbed my camera and walked up to the rim of the crater. Two young lads were emerging from their swags after the cold night. By the time I had walked around the rim the rest of the family were racing up the sides and we all descended the steep path into the middle for an entirely different perspective. Kangaroos had been scratching in the saltpan for water that collect during the wet season. It was pretty hot and dry now though and we could only see a few damp patches in the deepest diggings.

With little else to do at Wolfe Creek we headed back towards Halls Creek. We planned to return north via the Duncan Road that passes to the east of Purnululu national park and the China Wall is a giant natural vein of quartz, just 6km out from Halls Creek, that stands some 2-3m above the surrounding hill, reminiscent of the Great Wall of China. A brief stop at Caroline’s Pool allowed a cooling dip in the murky green water at lunchtime then it was off towards Sawpit Gorge, stopping briefly once to look at Palm Springs. Palm Springs in the outback is actually a pleasant palm-lined crystal clear spring with a few camping spots.

Sawpit Gorge was a couple of kilometres down another dirt track. We arrived at an uninviting dustbowl at the end, however, a quick river crossing saw us ensconced in a beautiful spot elevated a few metres above the river, overlooking the sheer cliff opposite, at the edge of the gorge. Once camp and a fire were set, an obligatory swim in the river was a perfect end to the day. The full moon rose casting its light into the gorge, together with the thousands of stars visible in the now cloudless sky, and as the campfire died down slowly as another silent outback night descended on the camp.