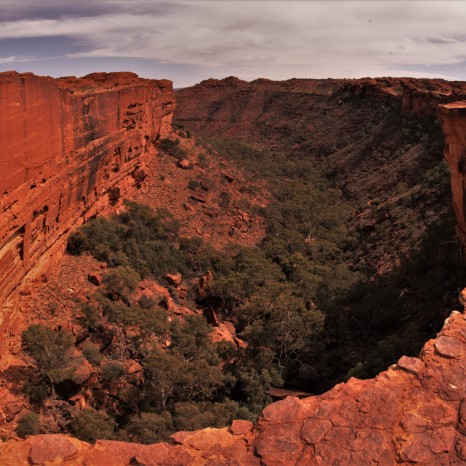 Clutching our permits that allowed us access to the Mereenie Loop we left Palm Valley early choosing to take the shorter route to Watarrka National Park. Travel early in the day is recommended to avoid afternoon sun in your eyes heading west. The unsealed road was rough, but fine to drive and nothing like a few of the 4WD tracks in the area. It passed through typical central Australian landscape of grassy savannah, sparsely populated with the Casuarina or sheoak trees, and the red dusty dirt that prevails everywhere. 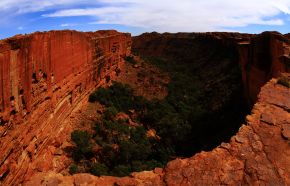 View down the canyon

It was a hot day and we decided to walk the 5km loop around Kings Canyon, rather than the short trip up the valley. The start was a punishing steep climb up a rock staircase, in searing heat, but once conquered the rest of the walk was pretty comfortable and relatively flat. At various points the unrestrained lookouts give you an eagle’s eye view of the canyon, sheer, flat, often overhung cliff faces disappearing into the treetops below. As soon they put up barricades for people’s safety (or protection from their stupidity) the raw beauty will be lost, but until then it remains a truly unspoilt natural wonder. Unfortunately though, Xavier doesn’t have a head for heights so he is noticeably absent from the photos as we couldn’t coax him to join us.

Around the halfway mark the track allows you to enter the “Garden of Eden”, an oasis below the cliffs that has abundant cycad growth and at the base an icy cold pool provides refreshing relief to the overheating walker. Four of us took what must be one of the shortest “dips” we have had and as the cold took hold it was hilarious to see everyone’s faces change to horror, then the mad scramble to scale the slippery rock-face back into the warm sunlight.

Beyond this there is a section of the walk that resembles the Bungle Bungles, a vista of layered beehive-shaped rocks covering the top of that part of the canyon.

With insufficient energy left to attempt another walk in the 33 degree heat we found an early camp secreted away in the bush, made a campfire and settled in to enjoy an undisturbed evening below a magnificent escarpment near Kings Creek. It was in the fading sunlight that Amanda noticed we had a flat tyre and I was obliged to perform a hasty change lying in the rocks and dirt before the light disappeared.