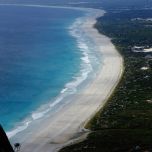 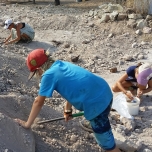 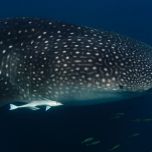 Time for a few short interviews with the family to reflect on the trip. Starting with the kids, X up first. If anyone wants to ask a question please send a reply to the blog and it will be added.

“What were your three favourite places and why?”

“What was the best thing you took on the trip?”
“My dad gave us a pocket knife at the start of the trip and I used it until it finally broke and I was given a new one for my birthday. I used it often for whittling wood, making cubbies, cutting fishing line, and many other things. It was so useful that Dad even borrowed it quite often.”
“What did you miss most, or just couldn’t take with you?”
“I would have liked to take more books on the wildlife and gems and rocks but we only had one drawer each in the camper trailer to put everything in. More books would have meant less storage for clothes and fossicking finds!”
“Would you do it again?”
“Yes. I have already asked Dad to take me back on the road for a fossicking trip to find gemstones. Dad wants me to be a bit bigger and stronger so I can do my fair share of the digging”
“How did schooling on the road go?”
“We enrolled in Sydney Distance Education Primary School (SDEPS). Mum and Dad were our supervisors. We had to send our work back every few weeks. It was hard to finish so much work every two weeks, especially when other kids were around playing, or if there was a great new place to explore” 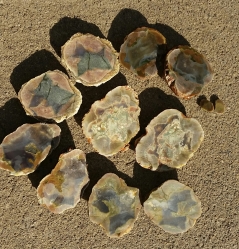 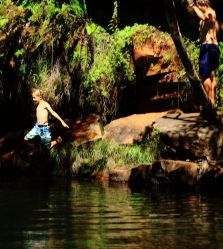 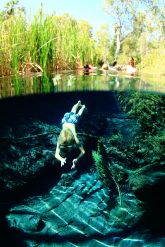 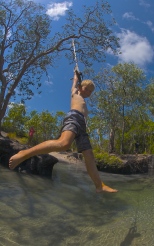 Alice Springs didn’t have the tyre we needed to replace our worn flat tyre so with no further reason to hang around we headed north up the Stuart Highway again to the junction with the Plenty Highway. This road is almost 500km long, predominantly unsealed, that provided us a relatively direct route into Queensland. Both the car and I are a little weary of corrugated dirt roads so this route offered a compromise. The road is also known for the mineral rich environment it passes through, and a random decision en route saw us pull in to the interesting named Gemtree caravan park.

The kids excitement levels rose when they saw there were tag-along gemstone tours for garnets and zircon so we duly booked up for the next day. The offer of a camp roast dinner that night proved too much too so that too was promptly booked. Then as we settled in to the site, each named after a gemstone, a cry went up that “110AroundOz” were in the camp, another Sydney family that we hadn’t seen for a while.

Kate and Arran, who run the park, won an award for their camp oven dinners in 2014. That evening Kate introduced her team and gave a thorough overview of the development and operation of the camp oven. The dinner was a well-oiled production line operation and the full-stacked plates that swiftly emptied were testament to the quality of the dinner. We have only had one roast dinner since we have been away so it was a real treat, particularly the beer keg-cooked spuds.

Early next morning the car was loaded with pick, shovel, sieves, bucket and a 20 gallon drum of water, and a small convoy followed our guide Greg along the dusty road, pulled off some kilometres later and arrived at an unremarkable spot. Greg demonstrated how to sieve the dug soil, and how to wash it and by looking through the base at the sun garnets can be identified by the blood red glow in the light. The fragments often looked like bits of broken glass, but we hit a good patch, and after a few hours we were the last to leave with a tin full of garnet fragments. Back at the park Kate examined and graded them, commenting that she had never seen so many cutting grade garnets found before. With our beady-eyed fossicking kids it wasn’t really a surprise. 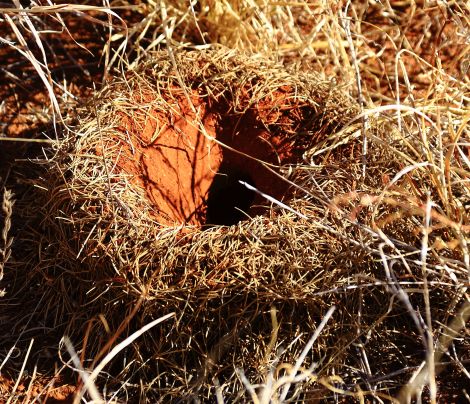 The property also hosts zircon fossicking trips, but I chose to take the self-guided nature trail that highlights many of the native shrubs and trees and their medicinal or other uses. The mulga ant holes lined the walkway, supposedly a sign of impending rain, but little evidence of this being the case on any forecast I have seen. Although I didn’t see as many birds as were found in the camping area itself I was amused to find a few tees for what must once have been a golfing grand plan. From their condition I guessed that maintenance of a big course is actually quite hard and I couldn’t find any evidence of flags where the holes might have been.

Gemtree was truly a hidden gem that we were lucky enough to stumble upon. A few days earlier we never even planned to be in this neck of the woods.

From Gemtree the Plenty Highway provided lots of dust heading east, but the road itself wasn’t too bad. A particularly large termite mound by the side of the road provided a welcome opportunity to stop and let the kids try to scale it. Apparently the insides of the mound can be rubbed on the skin as a mosquito repellent, but you have to break into the concrete-like structures first.

Urandangie and beyond Mount Isa

Just before the Plenty Highway ends and becomes the Donohue Highway past the Queensland border, we turned left, at Tobermory. For the next 70km or so of unsealed dirt there were regular signs promoting the Urandangi pub. Not that we needed to be tempted but the only pub between Alice Springs and Mt Isa was an offer too good to refuse. Still the humorous signs kept coming at regular intervals with things like “Hot Dusty Road, Ice Cold Beer”, and “Skippy’s Retirement Home”, many on recycled car bonnets. As we approached the town of Urandangie, the car bonnets announced the river crossings and features of the area, “Sally’s Crossing”. “Wallace Rockhole”, “Bill’s Crossing”, “Dinner Camp”, and many more.

At the end of the hot day we pulled up at the pub. To my delight there was a tap of Guinness, but this was just another cruel joke because in a town where the population is 7 adults the demand is obviously not sufficient to justify keg beer. As we quaffed our drinks the publican brought out two loaves of bread for the kids to feed the horses. When they returned she led us all out through the pub, through her lounge and into the backyard where a mob of baby joeys pottered around. One particularly friendly one, Chat, who loved a scratch and a cuddle came up to the kids and grabbed them in a tight hold, awaiting a scratch under the neck. He became quite interested in my beard, grabbing it in both paws before landing a kiss on my lips before I could escape. 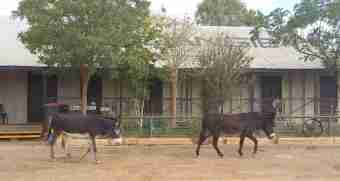 Donkeys in the high street 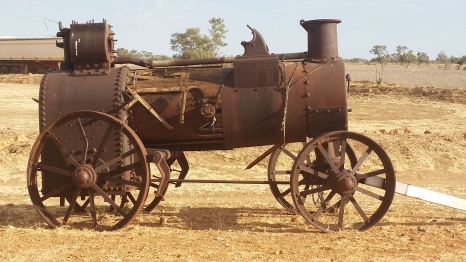 The town was established in 1885 and became a popular stop for drovers on the Georgina Stock route between Camooweal and Dajarra. Even Chinese migrants en route for goldfields stayed and worked here. The publican, Pam, provided us with an interesting summary of the history which provides a good read around the campfire.

We were then directed back down to the campsites near the river and established ourselves at Wallace Rockhole, where the pools of water looked promising to catch dinner. Unfortunately the only yabby we caught was returned unharmed as it would have only provided a snack for one!

The kids did find an inland python sitting on the rocks below the camp. Another beautiful starry night around the campfire was followed by a morning threatening rain. Dark clouds gathered from the West and a rainbow appeared nearby, but as we headed north towards Mt Isa we left it behind. A cattle muster crossing the road provided a temporary diversion from the unsealed monotony of driving.

Muster on the road 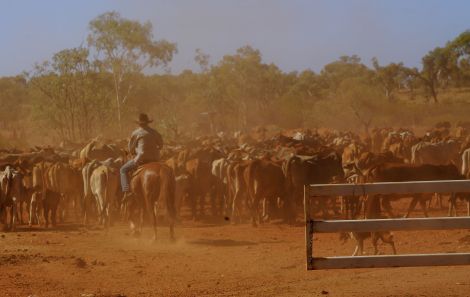 We were greeted by a huge power plant at Mt Isa, and knowing the Queensland National Parks have online bookings we thought it prudent to book a place at Boodjamulla National Park (Lawn Hill). After a lengthy process, more painful than pulling a tooth we found there was only one site we could book for three consecutive nights. Simon booked three different tent sites and we agreed to sort it out on arrival. Funnily enough we never seem to stop long in the big towns to explore and as soon as we have refuelled, restocked supplies we tend to head out as quickly as we can.

With the park 390km away we found a beautiful free camp by the O’Shaughnessy river on the way, arrived late in the afternoon for a quick refreshing dip, another campfire and marshmallows for the kids and the melodic bubbling of the river the next to the camp very quickly helped everyone fall asleep very quickly after another long day’s driving. 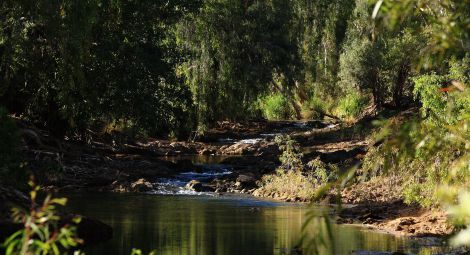