With balding tyres, worn brakes and a car desperately in need of another service I wasn’t keen to attempt the Creb track (4WD track to Cooktown) this time. It is not recommended for trailers and the steep ascents and descents become particularly hazardous in wet conditions. It had been overcast and we had experienced a few showers so we decided we would have a look at the Roaring Meg Falls at the start of the track, some 24km off the bitumen. We called the locals for permission and were duly given approval. The road was actually in good condition though it started pouring as we walked into the falls. A memorial to a lady who slipped and died on the falls in recent years was enough to deter the kids from going too close to the edge. Upstream was a more inviting swimming hole on a nice day, but the rain put us off.

Back on the main road again we visited Bloomfield, and another waterfall that was perhaps more impressive than Roaring Meg.

Daintree National Park was beckoning and finally we made it, staying in PKs Jungle Village, offering only a few camping spots. Finally the rains that had been threatening delivered with regular downpours. Given we have probably only had two weeks of rain in the last 11 months it was quite a pleasant change, despite a noticeable chill that accompanied it. We walked along the beach, over the headland and along Cape Tribulation Beach looking for cassowaries without success. 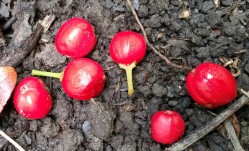 We took the boardwalk walks through the forest and mangroves. No cassowaries but we found a plethora of forest fruit that they dine on. We did find the peppermint stick insects that only live on the mangrove pandanus and are endemic to the area. When handled they squirt a fluid that has a peppermint scent.

We were keen to find cassowaries and the roadsigns showing places of recent sightings just served to tease us. Cape Tribulation was quite commercially orientated so we visited the Floraville ice creamery where they manufacture their own delectable ice creams. I tried the Sapote fruit one, tasting like chocolate pudding, finding it hard to fault. All the others devoured theirs swiftly leaving no trace in their tubs.

Next on the agenda was the Jungle Bug and Butterfly museum in Diwan. Housing an impressive cabinet display of bugs from around the world. The kids got to hold some local stick insects too. The property also offered a rainforest area by the river for a swim and cassowary sightings. The kids swam but this was the first day a cassowary hadn’t showed up for a few days.

We drove up and down the coast, up side roads, but still no sightings. We were lucky enough to catch a glimpse of a Bennetts Tree Kangaroo bounding across the road one afternoon, one of only two elusive species in Australia.

The cassowary is an endangered species, numbering around 1200 in Australia, and confined to the dense rain forests of the far north of Queensland. Daintree is where the “rainforest meets the reef” and speed humps line the roads to reduce unnecessary injury to birds wandering onto the roads. Someone has doctored a number of the roadsigns along the coastal road to give their humorous take on the situation (see photo below).

As we drove towards the Daintree River ferry a spontaneous decision made me turn off the main road and head for Cow Bay. A couple of kilometres down the road two adult cassowaries with a chick emerged from the thick forest and sauntered slowly across the road. We drove slowly towards them for a photograph and some video then within two minutes they melted back into the forest on the opposite side of the road. We were all thrilled at our chance meeting. 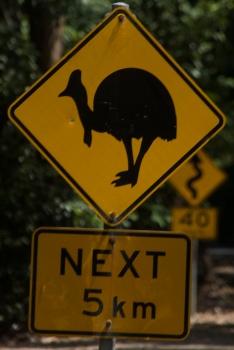 We left the rainforest behind once we crossed the Daintree River ferry and headed to Wonga Beach. This was our camp while we had a quick explore of the area. Mossman Gorge beckoned but after all the magnificent gorges and falls we have seen it didn’t seem right to have to pay to visit. We found an interesting site, as we explored, commemorating the only civilian casualty on the eastern seaboard in World War 2. Bombs were dropped in a Japanese air raid on lights that they believed were Cairns. The Suger Cane farm in Saltwater, near Mossman was hit and a two and half year old girl was hit with shrapnel from the crater. 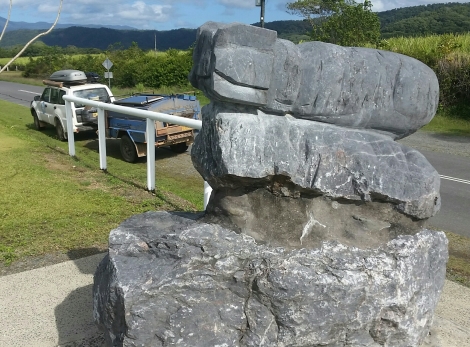