A very belated Happy New Year to all. Here’s hoping 2015 brings you all good health, happiness, and plenty of adventure!

Flinders Chase National Park occupies a large proportion the western end of Kangaroo Island, and when I visited Rocky River many years ago it was abundant with the stocky Kangaroo Island kangaroos, echidnas, koalas, Tammar wallabies, snakes and much more. In 2007 a bushfire swept through the park devastating two thirds of the bush, so things had changed and I think Rocky River, the centre of the park has been rebuilt. 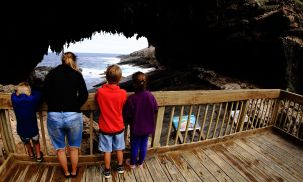 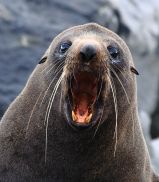 Wildlife still abounds, though not quite as intrusively as previously. The animals are still there though it seemed in smaller numbers. Birdlife proliferates around the centre at Rocky River and a number of short walks around the centre provides the visitor with opportunities to see the crimson rosellas, cape barren geese, scarlet robins and lots more. The visitors centre kept the kids busy for several hours with their touch tables of local animal skins, information about the megafauna that used inhabit the area tens of thousand years ago. The centre also provides a kit bag of tools for the kids to explore the sandpit. They got to experience the thrills of archaeologists, digging up/exposing megafauna bones in a 5 x 3m pit, a great learning experience.

We had to visit Remarkable Rocks which look like a giant has scattered unusually sculptured rocks on a solid granite base. The forces of erosion together with orange lichen growth make it a imposing site perched above the southern ocean backdrop.

Nearby, Admirals Arch hosts a colony of Long Nosed Fur Seals (previously NZ fur seals) which can be smelt long before you see them (very fishy and stinky), basking in and around the significant rock arch formation it was the season for spotting pups and some very cute ones at that.

For Christmas we headed to the most western point of the island, West Bay. The campsite was barely big enough for the trailer and awning but a lovely quiet spot perched just above a clean sandy surf beach. The kids didn’t hesitate their wildlife search and within a few stone turns we had new pets – Scorpions! Yes, scorpions in all colours and sizes. The kids took great pleasure feeding them ants and showing them off to our neighbours and their kids. Santa did find us there though his reindeer appeared to have a serious scuffle with the local possums judging by the commotion during the night in the campsite.