A rubbish experience for the kids 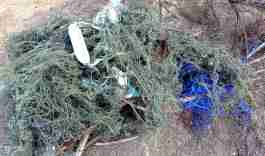 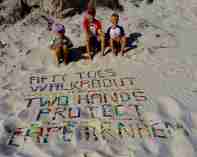 Another haul of cigarette lighters

The result of a quick scan of 3 beaches

Cleaning up the beach in Cape York 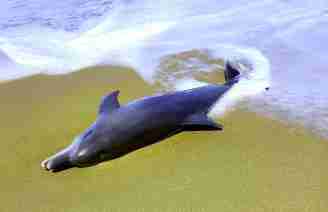 Fifty Toes Walkabout kids love their nature but in some of the most remote places we visited they were horrified to find, what should have been pristine beaches, covered in rubbish. The rubbish primarily consisted of man-made plastics, ranging from thongs, toothbrushes, bottles and their caps, to cigarette lighters and the much more sinister ghost fishing nets. These nets float freely through the oceans, either dumped or lost by trawlers, often stretching for hundreds of metres, even kilometres sometimes. They catch anything above a certain size that comes in their path. When they finally wash ashore they cover the rocks like vast blankets.

Much of the debris we found originated from Asia or from passing ships, brought to our shores by prevailing winds.

Amongst the piles of rubbish it was not unusual to find dead animals, particularly birds and turtles that had either consumed too much plastic (as it is often mistaken for food in the water), or become entangled in ghost nets. Most upsetting was the discovery of a recently dead dolphin on one beach.

We like to leave places in a better state than when we arrived and the kids decided that they wanted to clean up the beaches. In Cape York obliging Parks and Wildlife rangers provided us with bags and within 30 minutes we had filled more than six sacks (as much as we could carry), with much more remaining. The same beach had had many tonnes of rubbish removed by a team only a couple of months prior.

In Cape Arnhem there was so much we decided to target specific items on 3 beaches. The first day yielded over 100 thongs, then the next day 331 cigarette lighters, again just the tip of the iceberg.

The kids had so many questions about the origins of the rubbish that it stimulated some interesting discussion, and hopefully it has made them more aware of the consequences of using “throwaway” plastics everyday. You can teach that in a classroom but the impact of hand-on experience is far greater.

One thought on “A rubbish experience for the kids”