A long unsealed drive North West from Karijini brought us to Millstream-Chichester National Park. A brief stop was required to investigate what looked like an old livestock yard. The visitor centre at Karijini had shown us that early settlers had relied on aboriginal labour, being the only ones who could handle the heat, to do much of the hard work on the homesteads and stations. The livestock pens were hand-made from roughly hewn logs and branches, held together by hand-tied wire, long rusted in the decades it had been decaying there. The floor of one was even roughly tiled with large uneven rock slabs. We contemplated what stories there would have been associated with the place, now lost in the shadows of the past.

On arrival at the homestead we found out that the planned campsite was no longer in use so we chose to stay at Miliyanha campsite next to the visitor centre. The short walk through the forest of date palms and snappy gums, next to the homestead takes you past gin clear streams issuing from the natural aquifer there. The spring enters a pool offering a constant balmy 28 degrees Celsius, but due to the natural beauty swimming is not allowed here. This region has strong significance to the Aborigines who used to congregate here to establish laws. 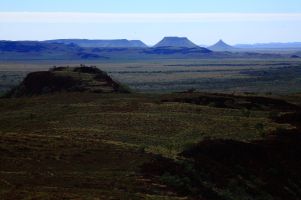 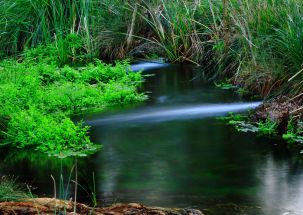 As it was so hot we drove a short distance to Deep Reach on the Fortescue River where we enjoyed a very pleasant swim, Millstream Palms, unique to the area lining the far bank, and rainbow bee-eaters sat in almost every treetop along the river. A clifftop lookout on the way back provided a different perspective of the river as the sun slowly descended in the late afternoon.

Bushfires in the last year or two have left the region fairly barren away from the river, many trees still struggling to regrow with charred scars still evident on their trunks and branches. The earth was still a rich vibrant dark red, darkening each day as the sun descends.

Birdlife was in abundance here and we caught glimpses of the blue winged Kookaburra, and hundreds of noisy Corellas flew in at dusk to roost next to us.

The next morning we headed to the other side of the park to visit the enticingly named Python Pool, near Snake Creek. Who could resist a swim there? A sheer rock wall almost 20m high conceals the pool at its base and a short walk through trees brought us to the pebbly shore and once again a swim was necessary before pressing on.

One thought on “Millstream-Chichester National Park”