Amanda’s parents had hatched a plan for a surprise visit in Exmouth and had booked the accommodation. We had managed to keep it secret from the kids, despite a couple of times when the cat was almost let out of the bag. 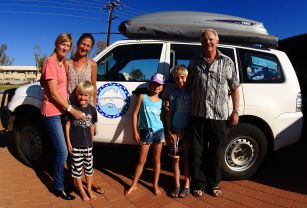 Unfortunately, flying in on the day that cyclone Quang was sweeping through the region meant they were stopped in their tracks in Perth, with the following day’s flight fully booked. When they finally arrived we were cutting a deliberately belated birthday cake for Hannah, and as they walked in the kids were a little confused at first. When the penny dropped big grins filled their faces and a round of Happy Birthday got things going again.

The PotShot Hotel over the road was our dinner venue and Grandpa Geoff went for a stone-grilled steak, where they provide the raw steak and an extremely hot volcanic rock on which to cook it to your specification. Those having fish and chips were impressed too, despite the apologetic barmaid who said it was a red-mouth emperor, rather than spangled emperor. It was so delicious we returned a couple of days later to try a variation on the stone-grill menu.

Geoff and Leonie joined us on the whale shark trip they were amazing and despite the rough conditions it was all smiles on the boat at the end of the day.

We took a trip down to Yardie Creek where they took two of the kids on a boat cruise, and whilst visiting Cape Range we swam at Turquoise Bay, Oyster Stacks again and visited the Turtle sanctuary. Despite the turtle egg-laying season having finished it was great to find a turtle had dug two holes the previous night and we could clearly see the laboriously made flipper prints emerging from, and then returning to the ocean.

The week that was shrunk to 5 days passed all too quickly and we farewelled Grandma and Grandpa as they left for the airport, and we repacked the trailer and set off for Ningaloo Station. Amanda had been so pleased to see her parents and a few tears were shed when they left.

2 thoughts on “A surprise visit”