Steep Point – Most westerly point of the mainland

A long dusty unsealed road took us from Wooleen Station back towards the coast.

Almost six months into our trip and over 23,000km later we finally arrived in the proposed Edel Land National Park with our sights set on completing the second compass point challenge from our good friends Pete and Zoe. The first one to South Point had been a gruelling two day, 40km hike for the kids, but this looked like a straightforward 35km drive from the unsealed road turnoff. Sure it said 4WD but we’ve had a bit of experience by now. We looked for a campsite around the Zuytdorp Cliffs (named after the Dutch ship that sank nearby in 1712), near False Entrance, found a lot of sand, enjoyed the blowholes, but then decided to go straight for the campsite at Steep Point. 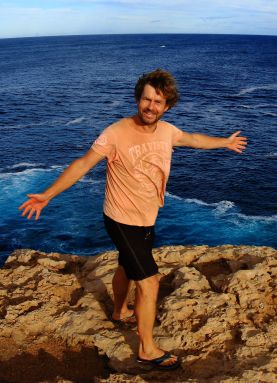 The western most point of Australia, Steep Point

Fifty Toes voted the track the “most corrugated and bumpy ride” ever. Then we turned off at the wrong house (1km before the ranger’s house) got stuck, lost two mudflaps reversing back, and found out from the ranger that all campsites were full and needed to be booked in advance. Given that it was after 5pm they found us a single spot that was available for one night only. An osprey nest sits perched atop a communications tower 50m from the rangers house. Swallows were flying through the house and the kids spotted a mouse running around inside, clearly a common occurrence as the ranger enquired whether the mouse was the “fat one”.

Shelter Bay was aptly named and we settled in for a calm pink sunset, looking out towards Dirk Hartog Island to the north east.

Rising early the next morning we headed straight to Steep Point. The visitors book was signed, photos taken as proof, then we drove down to the nearby camp at the Oven / Faultline where hard-core fishermen camp on the cliffs. This is one of the best land-based fishing spots in Australia, particularly for Spanish Mackerel. Lures are carried out on prevailing winds by balloons filled with helium. If a big fish is caught it needs to be hauled up the cliff and the fishermen have plenty of ropes and devices to do this. Brown helium cylinders, generators, fishing rods and swags were scattered around the craggy limestone cliffs, looking like a great venue for a lad’s trip, but less so for a family friendly vacation.