Murchison House Station was founded in 1858 by Charles von Bibra to provide meat and wheat to lead miners at Galena, beef to the growing Perth market and remount horses to the British army in India. The original homestead “von Bibra’s cottage” was built by Charles von Bibra with convict labourers in 1858. Using local materials it was constructed from Tumblagouda sandstone and mud bricks. The original shearing shed also dates back to the 1860’s. In its heyday up to 35,000 sheep would be brought to this shed for shearing. Features inside include the extensive use of Oregon pine and the 100 year old wool press and wool classing table. 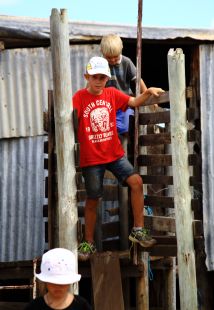 Fun in the Shearing shed

Fun on the fake tank

Inside the shearing shed 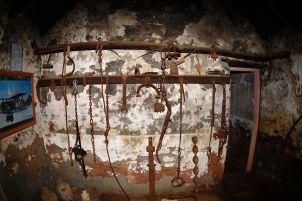 Located only a few kilometres from Kalbarri it served as our base for a few days while exploring the area. Unfortunately for us the recent rains had caused the river Murchison to flood and access to the opposite side of the river was closed. Due to school holidays there were plenty of kids around of similar ages to ours. Many hours were spent in the goat shed, then rounding them up again when Oscar accidentally let them out.

Then the home-made billycart was dragged from a shed and more hours spent riding around the courtyard. Evenings were spent around the campfire. It was nice to be able to have one after such a long time and those marshmallows tasted particularly good after the wait. Did I mention the bushflies? Oh and the snake Hannah found at night that looks suspiciously like a western brown. Can anyone confirm its identification for us?